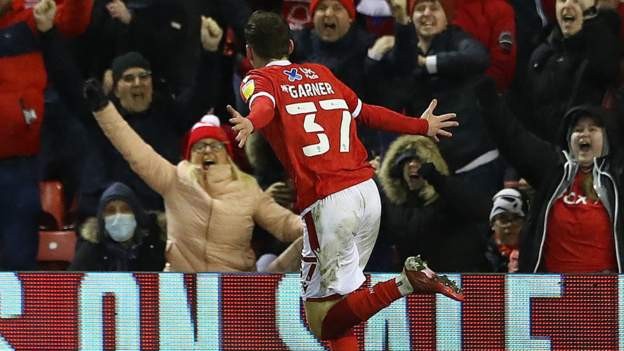 James Garner (left) hit his first goal of the season

James Garner scored and set up another as Nottingham Forest handed Peterborough their 10th away defeat of the season.

The Manchester United loanee turned in Brennan Johnson's cross from close range to break the deadlock 18 minutes from time.

Ryan Yates then converted Garner's corner from close range to make sure of the points.

Siriki Dembele almost put Posh in front early in the second half when his left-foot shot hit the post, but the visitors' goalless run extended to five matches.

Peterborough have picked up just three points on the road in 11 outings and have found the net just once in their last seven league matches.

Philip Zinckernagel looked to set the tone when his 25-yard shot forced Peterborough goalkeeper David Cornell into a diving save in the first minute.

But Forest's Brice Samba was the busier goalkeeper before the break, making saves from former Notts County midfielder Jorge Grant and Dembele, while Forest striker Lewis Grabban put an effort into the side-netting.

Steve Cooper's side responded in the second half, Grabban firing a low strike just wide and Paraguay midfielder Braian Ojeda sending a powerful shot just over the bar.

The hosts cranked up the pressure, but the spectre of a third successive goalless draw began to build until Garner intervened as Forest made it 27 points and one defeat from their past 14 matches.

Steve Cooper's side climb to 13th with their second win in eight matches, while Peterborough remain five points adrift of safety in 22nd.

Cafú (Nottingham Forest) wins a free kick in the defensive half.

Ronnie Edwards (Peterborough United) is shown the yellow card for a bad foul.

Lyle Taylor (Nottingham Forest) wins a free kick in the attacking half.

Goal! Nottingham Forest 2, Peterborough United 0. Ryan Yates (Nottingham Forest) with an attempt from very close range to the centre of the goal. Assisted by James Garner with a cross following a corner.

Joe Worrall (Nottingham Forest) wins a free kick in the defensive half.

Nathan Thompson (Peterborough United) is shown the yellow card for a bad foul.

Jack Colback (Nottingham Forest) wins a free kick in the defensive half.