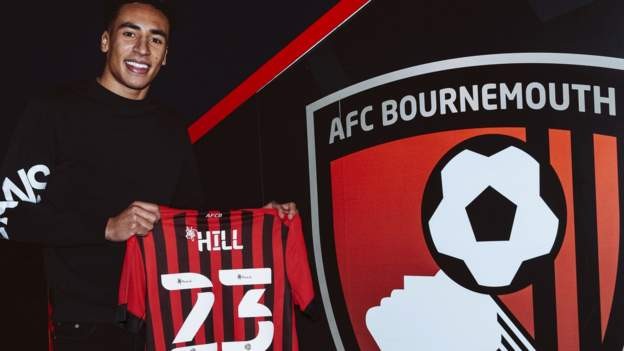 James Hill says he hopes to absorb as much knowledge and experience as he can from his new team-mates while he waits to make his Bournemouth debut.

Hill, 20, joined from Fleetwood earlier this month in a reported £1m move.

But ongoing recovery from a knee injury has meant his first few weeks at the Vitality Stadium have been spent in the gym rather than on the training pitch.

"I can't wait to put the boots back on and show the lads what I'm capable of," the defender told BBC Radio Solent.

Centre-back Hill was injured shortly after receiving his first England Under-21 call-up in November and last featured for Fleetwood in the same month.

"It was a really quick and fast process from the start of the move to completion, but I'm thrilled to be here and can't wait to get started," Hill said.

"I think I'm going to fit in nicely and the lads have been really welcoming so far. I definitely feel I can learn from the more-experienced lads, set my standards higher and keep improving."

Hill, whose father Matt also enjoyed a career as a defender with Bristol City, Preston and Sheffield United amongst others, will hope to learn from players including Gary Cahill and Chris Mepham in his new surroundings.

"The gaffer's told me that what I've done so far in my career has helped get me to this point and he likes my attributes and believes I can help this team," Hill added.

"He says mistakes of course get made, but it's about how you learn from them.

"I feel I can step up to this next standard and there's a clear pathway at this club for me to progress and I can't wait to get involved."

Bournemouth, who were relegated from the Premier League in 2020, are second in the Championship, five points behind leaders Fulham.

"I hope this club can take me to the very top. This club is going places and that was a massive part of me wanting to come here," Hill said.

"Fleetwood was a great place for me to develop my game in League One as we played pretty direct, but you also have to adapt your game in that division for different styles that teams play."