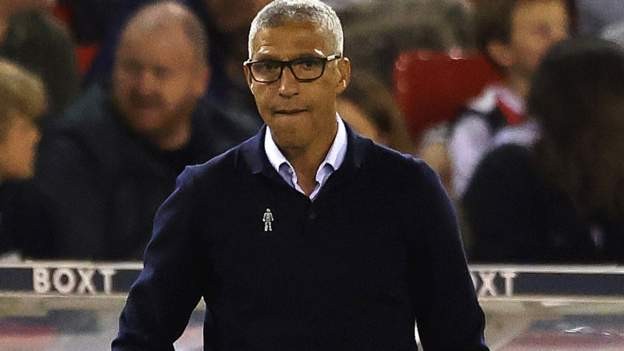 Nottingham Forest caretaker boss Steven Reid has said "it is hard to put your finger on" why Chris Hughton's spell in charge was unsuccessful.

Hughton was sacked on Thursday with the Reds bottom of the Championship after one point from seven games this season.

"It's been really tough. We had a great relationship and I had great respect for him," he told BBC Radio Nottingham.

"I thought us as a staff could have helped to get the club challenging but it wasn't meant to be."

Reid added: "It just hasn't worked on a results basis over the past 12 months and it's hard to put your finger on why when the work you're doing is to a really high standard and the atmosphere in training is fantastic.

"We have to quickly, in a way, forget why it hasn't worked and focus on the challenges that are ahead."

Hughton won promotion from the second tier with both Newcastle and Brighton and also enjoyed a good spell in the Championship with Birmingham City.

However, despite leading Forest away from relegation trouble after taking over from Sabri Lamouchi in October last year, he won just 14 of his 52 games in charge and failed to win any of his final 13 league matches.

Reid will lead the team in Saturday's game at in-form Huddersfield and said he is unsure at the moment how long his spell in charge of the team will last for.

"It is difficult because you have a loyalty to the manager who has gone but you are also employed by the football club and you have to do the job as they see fit," Reid said.

"It's the first time I've been in this position and I'll take some positives from it. I've worked with great managers like Steve Clarke and Roy Hodgson so I know I've got a lot of good people to lean on if needs be."