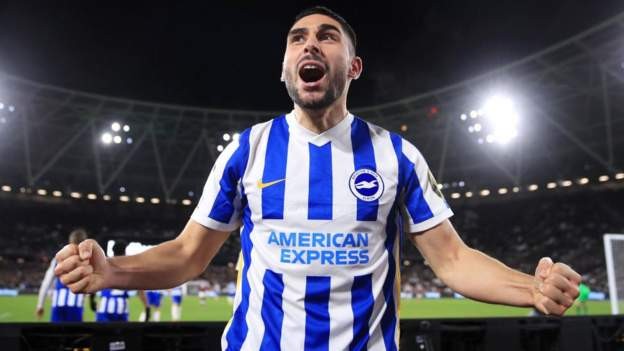 The Frenchman scored in the 89th minute when the Seagulls were down to 10 men after Adam Lallana had gone off injured, with the visitors unable to make any more substitutions.

West Ham had scored after only five minutes as Pablo Fornals' superb inswinging corner was glanced in by Tomas Soucek's near-post header.

Fornals nearly doubled their advantage but his well-struck 15-yard effort hit the underside of the crossbar and bounced clear.

The Hammers thought they had a second goal when the ball crept over the line off the heel of Brighton defender Shane Duffy in a goalmouth scramble.

However, it was ruled out following a lengthy Video Assistant Referee delay as Michail Antonio was adjudged offside before the ball hit the away defender.

Despite having further chances to score a second, the Hammers could not finish the game off and were punished late on.

West Ham v Brighton as it happened, plus reaction and analysisKeep up to date with the latest West Ham news here.Get all of the latest Brighton news here.

West Ham thought they had earned their eighth win in 14 Premier League matches and remain fourth, but only one point clear of fifth-placed Arsenal, who play at Manchester United on Thursday.

But Hammers boss David Moyes will be frustrated his side did not put the game beyond Brighton's reach.

In the last 15 minutes Jarrod Bowen shot just wide and Declan Rice and Antonio were both denied by Robert Sanchez before the visitors levelled.

For Brighton, it was a hard-earned point, although they have still not won since 22 September, a run now at 10 games.

They handed a first Premier League start to 19-year-old Ecuador forward Jeremy Sarmiento, but the teenager only lasted 12 minutes before he picked up a hamstring problem, with centre-half Adam Webster (calf) and midfielder Lallana (thigh) also suffering injuries.

Lallana's injury came after they had made three blocks of substitutions so they played the last five minutes a player short.

Brighton's players were booed during their 0-0 home draw against Leeds on Saturday, even though the club are on course to beat the 13th place they secured in the old Division One in 1981-82, their highest ever position.

But Graham Potter would have been delighted with their effort and resilience on Wednesday.

Since his Premier League debut in February 2020, only Everton's Dominic Calvert-Lewin (eight) and Crystal Palace's Christian Benteke (seven) have scored more headed goals in the competition than Tomas Soucek (six)

After West Ham's goal, the visitors had chances to equalise but Jakub Moder's shot was saved by Lukasz Fabianski before Dunk headed just wide from the resulting corner.

Immediately after the restart Solly March's deflected effort was tipped over by Fabianski with the Poland international also saving another Dunk header.

But they got their goal when a cross from substitute Tariq Lamptey found Maupay and his excellent finish secured a point.

Tariq Lamptey (Brighton and Hove Albion) wins a free kick in the defensive half.

Attempt blocked. Kurt Zouma (West Ham United) header from the centre of the box is blocked.

Attempt saved. Jarrod Bowen (West Ham United) right footed shot from the right side of the box is saved in the centre of the goal. Assisted by Declan Rice with a through ball.

Manuel Lanzini (West Ham United) wins a free kick in the defensive half.

Adam Lallana went off injured after Brighton and Hove Albion had used all subs.