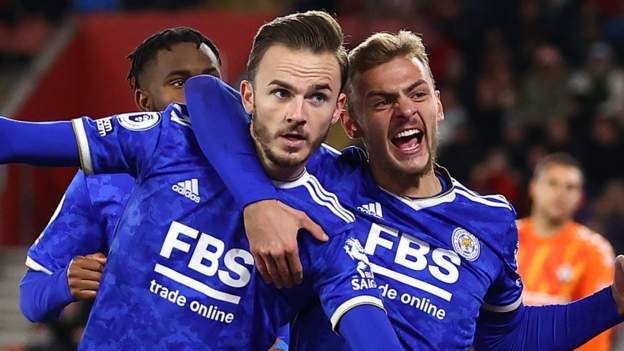 Leicester City twice came from behind to earn a Premier League point against Southampton at St Mary's.

The better side in the first half, Saints were rewarded for their positive start with a third-minute opener as defender Jan Bednarek reacted quickest when Mohammed Salisu's shot was saved after a corner.

Following a lengthy delay caused by a medical emergency in the stands, Leicester restored parity once more four minutes after the restart through James Maddison - the midfielder cutting back onto his right foot and finishing neatly into the bottom corner.

Alex McCarthy produced an excellent save to deny Harvey Barnes and Jamie Vardy fired over after pouncing on an error by Kyle Walker-Peters as the much-improved visitors pressed for a winner.

Although it did not arrive, the point was enough to move Leicester up to eighth in the table, while Southampton sit 16th, five points above the bottom three.

Reaction to Southampton v Leicester, plus the rest of Wednesday's Premier League action

Ralph Hasenhuttl called on his Saints side to hit the "reset button" on Wednesday in an attempt to rediscover their early season form.

Bednarek's far-post finish in the aftermath of Nathan Tella's short-corner routine suggested his players were up to the challenge following Saturday's 4-0 humbling by Liverpool at Anfield.

Among three changes as Saints reverted to a back four at St Mary's, 22-year-old midfielder Tella impressed with his work rate, and the energetic hosts deserved their lead at the break.

Although Brendan Rodgers felt his team had "probably settled" following an inconsistent start to the campaign - Sunday's entertaining 4-2 win over Watford on Sunday was only their third in 10 in the league - the visitors were punished for a lethargic start.

The Foxes have failed to keep a Premier League clean sheet since the opening day and they were unable to build on Evans' leveller as Adams drifted in to meet Redmond's cross unchallenged.

Vardy touched the ball fewer times than any team-mate as Leicester initially struggled for fluency in attack and it was Maddison, continuing his return to form with a fourth goal in six starts across all competitions, who provided the spark for a Foxes revival.

The midfielder admitted to struggling with confidence prior to his recent run, but he looked back to his best as he drove his side forward before collecting Luke Thomas' pass, beating his marker and rolling into the corner.

Excellent chances for Barnes and Vardy will leave Leicester feeling they could have taken more but it was a hard-earned point to begin a relentless run of nine matches in 28 days before the end of the year.

Wilfred Ndidi (Leicester City) wins a free kick in the defensive half.

Kiernan Dewsbury-Hall (Leicester City) is shown the yellow card for a bad foul.

Attempt blocked. Che Adams (Southampton) right footed shot from the left side of the box is blocked. Assisted by Oriol Romeu.

Substitution, Southampton. Lyanco replaces Jan Bednarek because of an injury.

Wilfred Ndidi (Leicester City) is shown the yellow card for a bad foul.