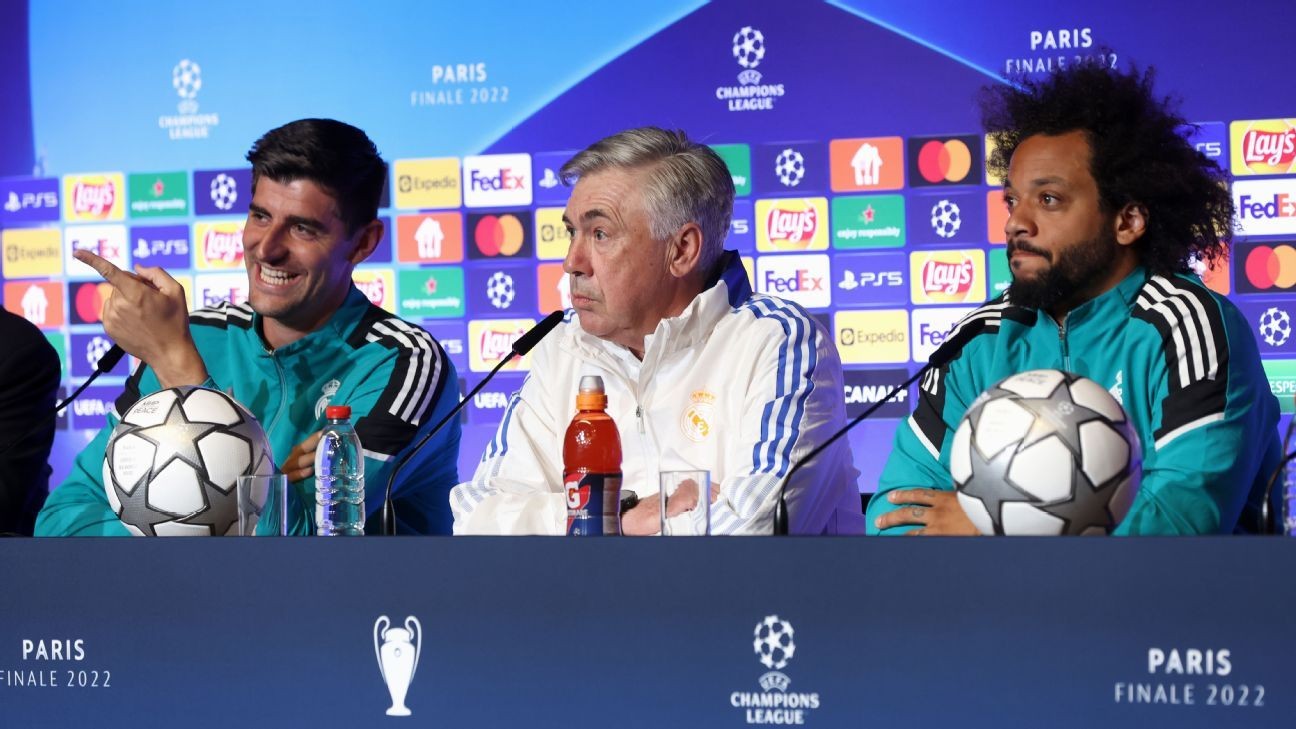 Thibaut Courtois has sent a warning to Liverpool with the Champions League trophy on the line by declaring: "When Real Madrid play a final, they win it."

Real face Liverpool in Saturday's showpiece at the Stade de France aiming to lift the trophy for a record-extending 14th time.

Since the European Cup was redesigned as the UEFA Champions League in 1992, Real have triumphed in all seven finals they have played, including a 3-1 win over Liverpool in 2018.

Courtois was on the wrong end of another Real victory, in 2014, when playing for Atletico Madrid while on loan from Chelsea, as Los Blancos triumphed 4-1 in extra time.

Now aged 30, Courtois has the chance to win the Champions League with Real for the first time and when asked what Liverpool would be thinking ahead of the match in France, the Belgium goalkeeper said: "They've already played one final against Madrid in 2018. It was different for me. Real Madrid, when they play a final, they win it, and so now I'm on the right side of history."

Madrid have recovered from losing positions in each knockout round, trailing to Paris Saint-Germain, Chelsea and Manchester City only to stage rousing comebacks against all three teams and head coach Carlo Ancelotti believes the club's past glory has helped propel them to the final once more.

"We deserved to get to the final because of quality first: if you don't have individual quality you won't get to the final, but quality and talent isn't enough," he said. "You have to put it together, the quality of everyone together makes the team have commitment and we've had that.

"Then the history of this club has pushed us in difficult moments, we deserve to get to the final but we have to deserve it tomorrow, there's no other way."

Defender Marcelo refused to be drawn on reports he may be offered a new contract to extend his stay at Real beyond the summer.

The 34-year-old moved to Madrid in 2007 and has become the club's most successful player ever, winning 24 trophies during his time in the Spanish capital. However, he is out of contract at the end of the season and when asked whether he would prefer a fresh deal or a statue outside the Santiago Bernabeu, the Brazilian said: "Everyone knows my passion and love for the club of my life, Real Madrid. I started at Fluminense, they gave me everything, and Real Madrid has given me everything.

"I won't say here now, people can speculate, but I don't need a statue, my history is there at Real Madrid, I'll keep giving everything for Real Madrid. I don't think a statue would make sense but after the final we'll see."