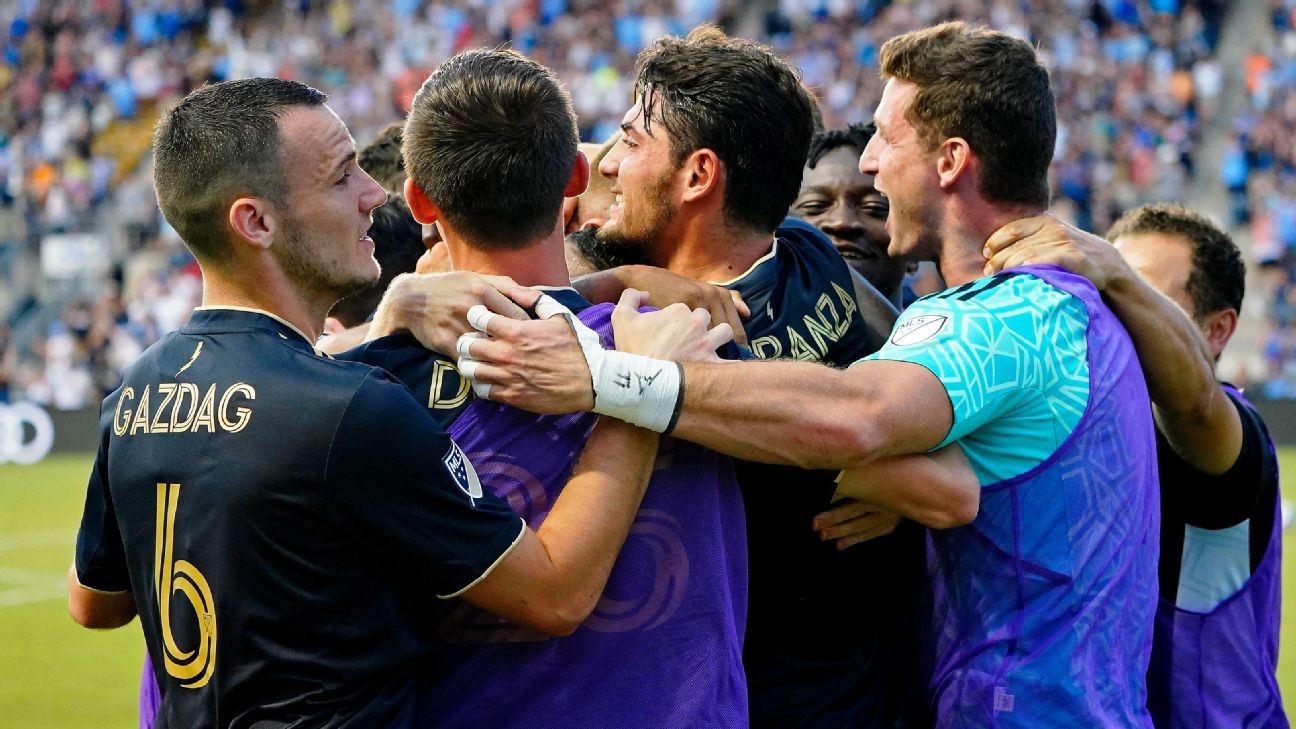 While New York City FC fought off an MLS Cup hangover and set its sights on an ultimately futile CONCACAF Champions League run, the Philadelphia Union established themselves as the team to beat in the Eastern Conference and a Supporters' Shield rival for LAFC. In the past two months, though, everything had changed. NYCFC grabbed the aspirin and a cup of coffee to rocket up the standings, while Philly won just one in its past ten.

The Bronx Blues visited Philadelphia on Sunday for a meeting of two of the conference's best, and Jim Curtin's team leapt out to a sixth-minute lead that it would manage for the following 82 minutes. Then Valentin Castellanos equalized in the 89th, and the Union looked destined for a draw, only for Cory Burke to dig deep, score a 96th-minute winner and deliver the club just their second win since April 10.

For the first time all season, there's the hint of a bout at the top of one of the conferences.

With Week 16 in the books, Kyle Bonagura and Danny Guerra look at the results, break down where all 28 teams stand after a wild weekend of action and bring you the latest edition of the MLS Power Rankings.

The Black and Gold have been the best team to this point, so, of course, they went out and bolstered the squad with Gareth Bale and Giorgio Chiellini, both of whom could be eligible to play against the Galaxy on July 8 (10 p.m. ET, stream live on ESPN). It likely won't stop there, either, as GM John Thorrington indicated it's likely the club will fill its vacant Designated Player spot, too. -- Bonagura

RSL's goalless draw with Columbus wasn't an indicative result, but it's clear momentum is building in Salt Lake. The club has sold out eight straight matches at Rio Tinto Stadium and it has the league's best home record (6-0-2). With its next four matches against teams below the playoff line, RSL have a chance to make a push for the top spot in the Western Conference standings. -- Bonagura

The emerging rivalry between NYCFC and Philadelphia ramped up in Sunday's 2-1 win for the Union. NYCFC were knocking at the door with 10 minutes left before scuffling between the players (and a Philly trainer) derailed the match. VAR then gaveth NYCFC a penalty to seemingly salvage a draw, only for it to taketh when Philly were awarded an initally called-offside goal. -- Guerra

Goals from Sebastian Driussi and Danny Hoesen rescued a point for Austin, after it fell behind 2-0 at home against FC Dallas. Driussi's goal takes him level with Jesus Ferreira (Dallas) and Jeremy Ebobisse (San Jose) atop the league's Golden Boot race (9 goals). -- Bonagura

The moment of the match from the Union's wild win over NYCFC? Not the final minutes that saw VAR decide a goal for each side, but the melee in the 79th minute that saw a Philly trainer get red-carded for shoving an NYCFC player while exchanging some lively words. Guess there is a first time for everything in MLS. -- Guerra

RBNY have been solid on the road all season and among the top teams in the East, but Sunday's trip to MLS-best LAFC didn't go as planned. Two starters -- Luquinhas and Aaron Long -- were ruled out due to health and safety protocol before kickoff. A draw seemed to be in play before LAFC made some key subs and got the win. -- Guerra

The 2-2 draw with Austin feels more like two points dropped after Dallas conceded twice after taking a 2-0 lead on second-half goals from Paul Arriola and Brandon Servania. After the splash LAFC made this week, Dallas could make a statement of its own with a win in Los Angeles on Wednesday. -- Bonagura

Hany Mukhtar's goals come in bunches. His brace in Nashville 3-1 win against D.C. United was his third of the season and takes him to within a goal of the Golden Boot leaders at eight this season. -- Bonagura

play0:43Mukhtar knocks in his 2nd goal of the match

Hany Mukhtar's shot deflects in for a score to further Nashville's lead to 3-0.

Using a Designated Player slot on Douglas Costa was looking like a whiff even before LAFC brought in Bale on a TAM deal. That splash signing adds a greater sense of urgency for the Galaxy to improve as they hover near the playoff line and their dominance in the L.A. market continues to erode. -- Bonagura

Still playing without Djordje Mihailovic, the Canadian club did enough against a depleted Charlotte side to keep pace for the top spot in the East. Without Mihailovic, Romell Quioto did his part by scoring an early goal and playing a part in the game-winner. -- Guerra

After smashing Sporting Kansas City, 3-0, the Sounders' upward trajectory continues. Since the start of May, only NYCFC have a better points per game average (2.1) in MLS than Seattle (2.0). -- Bonagura

The Lions' attack sputtered without playmaker Mauricio Pereyra in the lineup against Cincinnati. Still a formidable side, but Orlando would like to see someone off the bench such as Tesho Akindele or Alexandre Pato contribute a bit more. -- Guerra

play0:57Brenner guides in the lone goal to give FC Cincinnati the win

Brenner taps home the game-winning goal to give FC Cincinnati a 1-0 win.

Cincy's first MLS season saw it win six games, followed by consecutive four-win campaigns. This term, FCC already have seven victories. Luciano Acosta continues to impress, nearly scoring a goal before hustling to provide the pass for Brenner's game winner. As for the latter, hopefully his first goal of the season spurs some confidence. -- Guerra

Revs keeper Djordje Petrovic won't make fans forget Arsenal-bound Matt Turner anytime soon, but a couple of clutch, diving saves in a scoreless draw with Vancouver showed what he can do. The Revs were unlucky to not score in this one, but Bruce Arena's side look to be okay if Petrovic can keep it up. -- Guerra

The Dynamo have scored (20) and allowed (19) the same amount of goals this season as Real Salt Lake, yet that hasn't translated to results. A 2-0 win against Chicago with goals from Darwin Quintero and Sebastian Ferreira on Saturday gave Houston its first win at home since May 14. -- Bonagura

It was a solid win for Miami over visitors Minnesota, rallying from a goal down thanks to a late brace by Aston Villa loanee Indiana Vassilev. After the game, Miami coach Phil Neville praised first-year player Bryce Duke for his control in the midfield. The win also extended Miami's home unbeaten streak to six games. -- Guerra

Miami's Indiana Vassilev scores his second goal in the 90th minute to take the late lead.

Another week, another major injury for Atlanta. Starting right-back Brooks Lennon will now miss six to eight weeks after suffering an knee injury in warmups ahead of a 2-1 loss at Toronto. Luiz Araujo had a great goal but the makeshift midfield and depleted defense continues to provide headaches. -- Guerra

Winless in three following a 3-0 loss to Portland, the Rapids' attack is need of a complete overhaul. Since trading for striker Gyasi Zardes on April 22, Colorado is the only team in MLS to average fewer than one goal per game (0.9). -- Bonagura

Interim coach Christian Lattanzio lost his first game at helm in the 2-1 defeat to Montreal, and Charlotte remains winless on the road this season. The Queen City side had 10 players unavailable due to injuries and protocol, and had a chance to earn a draw throughout the game, so it wasn't the most heartbreaking effort. -- Guerra

The Crew are scraping by without a bevy of top scorers, such as Derrick Etienne Jr. and Lucas Zelarayan, and are awaiting the arrival of club-record signing Cucho Hernandez. Following a scoreless draw at RSL, the week gets tougher with visits to Toronto and Minnesota. -- Guerra

Jaroslaw Niezgoda fires home back-to-back goals to give the Timbers a 3-0 lead in the 62nd minute.

Portland's 3-0 win against Colorado snapped a four-match winless streak, dating back to its 7-2 win against SKC on May 14, and makes it just two wins in 11 matches. A turning point? We'll see. -- Bonagura

In their past four games, the Whitecaps have won against Dallas and RSL and a drew against New England -- this is a team that can compete with anyone in the league. They just can't find any consistency. The 'Caps rank second-to-worst in the league in expected goals (xG) per game (1.1), which doesn't indicate a reversal of fortune is coming soon. -- Bonagura

No team in MLS has fewer points than Minnesota since the beginning of May (4), a span of eight games in which it has scored just six goals. A 2-1 loss to Inter Miami on Saturday makes four straight losses, including the loss to third-division Union Omaha in the U.S. Open Cup. -- Bonagura

There are at least two more games before the Lorenzo Insigne era officially begins in Toronto, but Bob Bradley's side seem to be correcting the ship after early-season struggles. Jonathan Osario, who had been hobbled by injury but scored in his return to the lineup, should pair well with the former Napoli great. -- Guerra

Dating back to the league's foundation in 1996, the club's worst single-season goal differential is minus-20. It happened twice: 1999 and 2001. At minus-16 through 18 matches, SKC -- who are averaging just 0.89 points per game -- are trending toward worst-season-of-all-time territory. -- Bonagura

The Quakes didn't play last week after the California Clasico was postponed, meaning they finished the month of June without scoring a goal (albeit in only two games). Even so, Jeremy Ebobisse remains tied for the Golden Boot lead (nine goals). -- Bonagura

Tied with D.C. for the least goals scored this season at 14, Chicago is back to its woeful ways following a 2-0 loss to Houston. After breaking a 10-game winless streak last week, Chicago didn't muster much in Texas. Xherdan Shaqiri and Jairo Torres both sat out with injuries for the second straight match. -- Guerra

Winless in six matches, the sole bright spot in DCU's loss at Nashville was another goal for Taxiarchis Fountas. The Greek DP now has six since joining earlier this season, but D.C. is dire need of more playmakers. They do have two DP spots available. -- Guerra