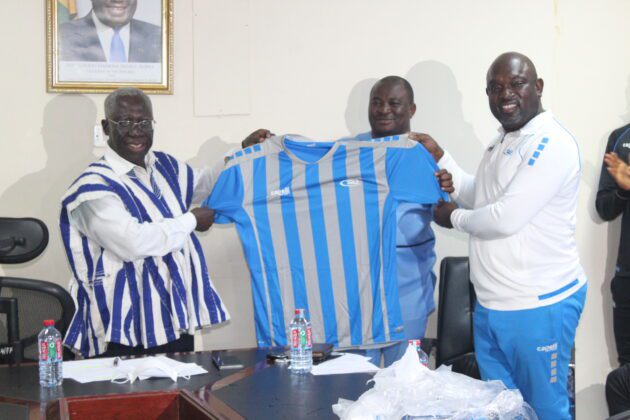 The Akim Oda-based club qualified for the first time in their history after winning Zone three of the 2021/22 Division One League.

Mr. Linford Asamoah Boadu, Chief Executive Officer of Kotoku Royals, thanked Mr. Osafo-Maafo for his contribution to the team's qualification and expressed gratitude to the Akyem Kotokuman Parliamentary Caucus for their support during the presentation of the team's jersey to him in his office in Accra.

“The journey to qualification to the Premier League was very tough, having started from Division Three, and I want to thank all who contributed towards achieving this target.

“Now, the task is to sustain our Premier League status for a long period of time, and I would urge all parliamentarians within the Akyem area and the Senior Presidential Advisor to support our preparation for the next season’s league,” Mr Asamoah Boadu said.

Mr. Osafo-Maafo, who is a former Member of Parliament for Akim Oda, congratulated the team for making history by becoming the first team from Akyem Kotokuman to play in the Premier League.

“You have brought honour to the people of Akyem Kotukuman and I congratulate you on the milestone. I urge you to be very disciplined and work hard to move to greater heights.

“The Premier League offers you a good platform to market yourselves, and we woud always be available to support the team,” he told players and the technical team.

The Senior Presidential Advisor further stated that they would fast-track efforts to put the Oda Stadium in a good state to be able to meet the requirements of the Club Licensing Board of the Ghana Football Association.

Mr. Osafo-Maafo, who is also a former Sports Minister, urged the team to maintain their status in the Premier League for a very long period so the people of Akyem can enjoy some good football displays from the team.