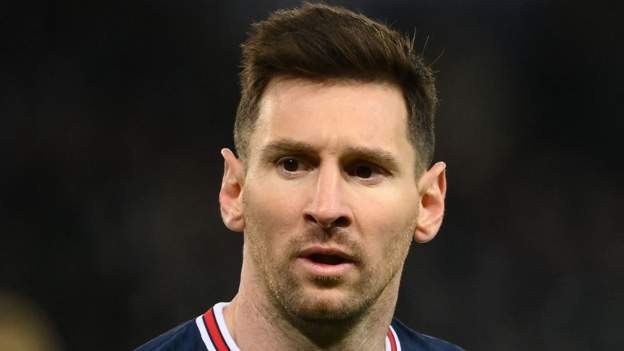 Paris St-Germain failed to win at home in Ligue 1 for the first time this season as the leaders were held to a goalless draw by Nice.

Lionel Messi and Kylian Mbappe were unable to inspire their side in the absence of fellow forward Neymar, who will be out for up to eight weeks after suffering ankle ligament damage.

That was despite 22 shots at goal for the hosts at Parc des Princes.

The point leaves Mauricio Pochettino's side 12 clear at the top.

Prior to kick-off, former Barcelona forward Messi was presented with his record seventh Ballon d'Or - awarded to the best footballer of the year - in front of the PSG supporters, as was goalkeeper Gianluigi Donnarumma with the Yashin Trophy for best goalkeeper.

But on the pitch, with Angel di Maria replacing Neymar in attack, PSG were denied victory for just the third time this campaign.

Their tally of 22 shots is the most they have had without scoring in a league game since March 2016.

Marco Verratti (Paris Saint Germain) wins a free kick in the defensive half.

Attempt missed. Idrissa Gueye (Paris Saint Germain) right footed shot from the centre of the box misses to the right. Assisted by Lionel Messi with a cross following a corner.

Melvin Bard (Nice) is shown the yellow card for a bad foul.

Dante (Nice) wins a free kick in the defensive half.