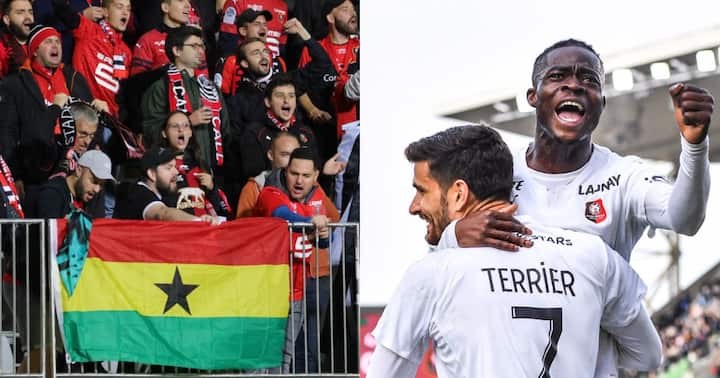 Stade Rennes fans hanged a Ghana flag at the stadium to acknowledge the outstanding exploits of teenage sensation Kamaldeen Sulemana for the club.

The Rennes fans who travelled to Slovenia to support the club in the UEFA Europa Conference League on Thursday, were seen with a Ghana flag to celebrate the 19-year-old.

Rennes recorded a 2-1 over Slovenian side NS Mura at The Stadion Ljudski vrt in Maribor.

Sulemana has been in devastating form for the French Ligue 1 club since joining from Danish side FC Nordsjaelland in the summer.

The highly-rated winger has netted 5 goals and provided one assist in 14 appearances in all competitions so far for Rennes.

With his scintillating form, Sulemana has been named in the Ligue 1 team of the week on four occasions.

Sulemana stole the headlines in France after his amazing performance against PSG saw his side beat the French giants 2-0 few weeks ago.

The teen sensation played a significant role for the Black Stars in their back-to-back victories over Zimbabwe in the 2022 World Cup qualifications earlier this month.