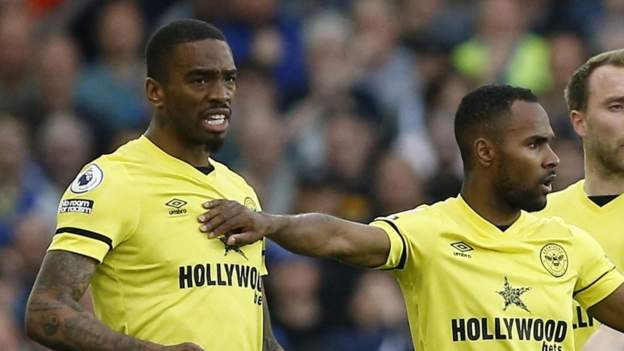 Incidents at Premier League matches on Sunday show "hate is alive and well within football", says anti-racism charity Kick it Out.

Striker Ivan Toney and full-back Rico Henry made the allegations after the Bees' 3-2 victory.

It came hours after two Burnley fans were arrested for "discriminatory gestures" during Tottenham's 1-0 win.

The Metropolitan Police said the men were ejected from the Clarets' section of the Tottenham Hotspur Stadium on suspicion of a racially aggravated public order offence.

"We have been made aware of a spate of new alleged anti-Semitic and racist comments and gestures linked to several clubs over the weekend," said Kick It Out's head of player engagement Troy Townsend.

"While investigations are ongoing, we cannot comment on the specifics of cases. However, the events of the weekend once again highlight the fact that hate is still alive and well within football.

"Everton, Burnley and Tottenham all acted swiftly and we commend their energy in addressing these incidents. We hope appropriate and decisive action is taken against all those involved."

In February, UK football policing lead Chief Constable Mark Roberts said there had been an increase in hate crime incidents reported in stadiums in the first half of the 2021-22 season, when they rose to 206, compared to the same period in 2019-20, when there were 146.