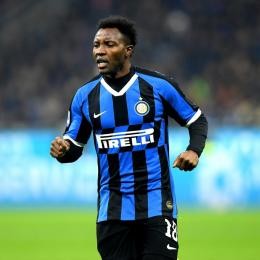 Kwadwo Asamoah is being tracked by four top clubs in Europe after reports emerged of the possibility of the Ghana midfielder leaving Inter Milan.

Rival Italian top-flight sides Lazio and Napoli are the two Serie A clubs who have contacted his agent over a move for the versatile player in the summer.

The 31-year-old has also been targeted by German side Hoffenheim as well as Turkish giants Fenerbahçe ahead of the summer transfer window when he is expected to move.

Former Juventus player is currently on a deal with Neroazzurri until June 2021 but injuries to his knee looks to have sent Inter looking for other options for the player.

The versatile players has more than often been out injured this season with one injury or the other.

Despite Antonio Conte's esteem for the Ghanaian, the latter could leave for physical reasons.

He was part of the starting line up at the beginning of the season, but the former Juventus man has now found less space in the team due to physical problems.

He has been tormented by a troublesome knee cartilage problem, which already in 2014 had forced him to stop.

The purchase of Ashley Young in January has inevitably pushed Asamoah down the pecking order.

The player has a contract with Inter Milan until June 2021 and receives around € 3 million per season.

Asamoah's lack of physical reliability of the former Juventus player could push Inter to sell him.

In addition to Asamoah, Cristiano Biraghi could also leave at the end of the season.