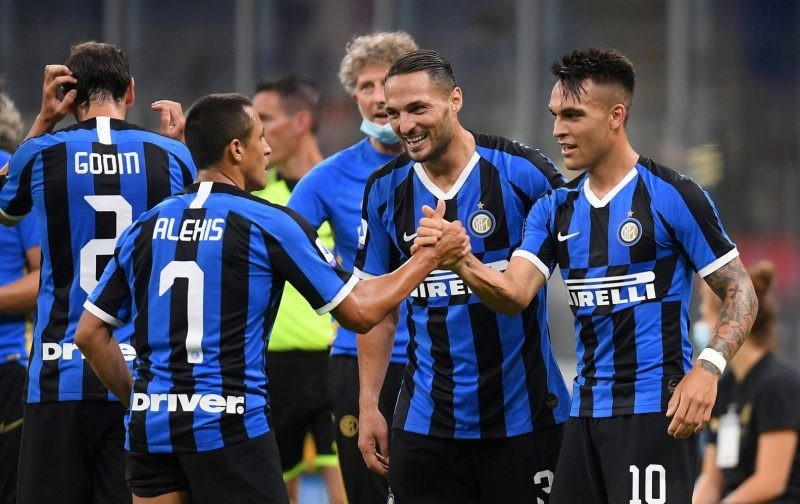 A first half gaffe by Samir Handanovic could have piled more misery on Inter after their recent moments of struggle, but Antonio Conte’s side put on a brave display to beat Torino 3-1 at the Stadio Giuseppe Meazza.

An Andrea Belotti goal seemingly set the tone for Inter, given their captain’s error, but a resurgence in the second half, inspired by Alexis Sanchez, saw Ashley Young, Diego Godin and Lautaro Martinez complete the comeback.

That sees the Nerazzurri climb to second in Serie A, as they are level with Lazio on 68 points, on goal difference, and are one point ahead of Atalanta. Inter lost no time in making their intentions clear by immediately piling pressure on Torino, who struggled to retain possession as a result.

The Nerazzurri’s dynamic and aggressive style led to a couple of early chances, but a wayward Lautaro shot was followed by a more precise attempt by Marcelo Brozovic which Salvatore Sirigu did well to palm away.

Whilst the home side looked in control, the Granata proved sharp and took advantage of a horrible Samir Handanovic mistake. Inter’s skipper failed to hold onto the ball coming from a corner, and dropped it at the feet of Belotti to easily slot in his sixth consecutive Serie A goal. Antonio Conte’s men seemed eager to show their character and were back at it again, moving the ball nicely but not really having an answer for their opponents’ solidity at the back.

Lautaro missed a golden chance after 30 minutes when Roberto Gagliardini dispossessed Ola Aina to put the Argentine one-on-one with Sirigu, although his effort was parried by the visiting goalkeeper.

Torino almost doubled their lead on 40 minutes as Belotti and Christian Ansaldi led a lethal counter attack, with the latter cutting inside before unleashing a low strike at the near post that Handanovic somehow managed to block. Young had a shot wide from long range just before half time, as Romelu Lukaku’s absence deprived Inter of their most effective offensive option.

After the interval, Inter took an aggressive approach once again and this time their pressure was more fruitful.

Brozovic’s cross fell at the far post, where Lautaro nicely flicked the ball to Young, whose powerful strike beat Sirigu to level the score. Inter went ahead less than three minutes later, when another header, this time from Sanchez, found Godin unmarked and he headed in his first goal in the Nerazzurri shirt.

Conte’s wild celebrations highlighted the importance of a comeback which warded off fear of another mental collapse.

The hosts didn’t settle for a one-goal margin and added a third just after the hour, as Lautaro put an end to a five-game goal drought when he was set up by Sanchez and unleashed a shot which was deflected and looped over Sirigu. Belotti almost pulled one goal back for the visitors as he met a cross to head against the bar, a stark reminder for Inter that they have to hold concentration.

Torino youngster Vincenzo Millico came on late to show glimpses of his talent before Sirigu produced a double save to deny Gagliardini twice.