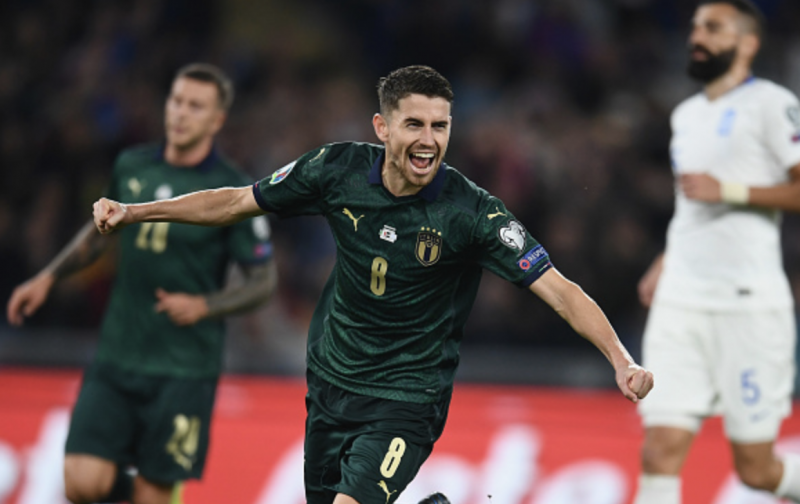 Italy guaranteed themselves a place at Euro 2020 with a 2-0 win over Greece at the Stadio Olimpico on Saturday thanks to goals from Jorginho and Federico Bernardeschi.

The Azzurri, playing in their controversial green kit for the first time, toiled in the first half before striking twice after the break to make it seven wins from seven in qualifying.

Roberto Mancini’s side have secured passage to next summer’s finals with three games to spare, the earliest they have ever managed to do so. Italy dictated proceedings in the first half, having 72 percent possession, but failed to register a single shot on target and even risked going behind with the only real chance of note before the break.

A slick passing move from the visitors sent Dimitris Limnios through on goal, but Gianluigi Donnarumma stuck out an arm to stop the striker’s angled shot from sneaking in at the front post.

The game eventually came to life in the second half as Ciro Immobile’s header was palmed wide by a diving Alexandros Paschalakis before Efthymis Koulouris smashed a promising opportunity into the side netting from a Greek counter-attack. Mancini’s men made the breakthrough when they were awarded a penalty for handball just past the hour mark, which Jorginho tucked into the corner.

Substitute Bernardeschi, who came on for the injured Federico Chiesa in the first half, made sure of the points with a superb long-range effort with 12 minutes remaining, though it did take a slight deflection on it’s way into the back of the net.