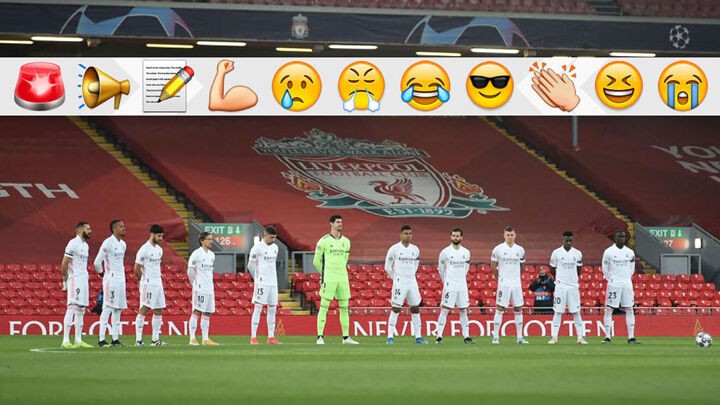 For a team that was consigned to the Europa League in October, Real Madrid haven't done badly getting to the semi finals of the Champions League.

Zinedine Zidane has had to deal with injuries galore this season and, even without Sergio Ramos, Raphael Varane, Dani Carvajal and Eden Hazard at Anfield, his side looked in control of their destiny against Liverpool.

You really can never write off Real Madrid. Only Chelsea stand in their way of a Champions League final, while the title is still possible in LaLiga Santander.

To get out of Anfield alive, you have to have a special goalkeeper. Thibaut Courtois set the tone for an outstanding display with a top stop to deny Mohamed Salah in the early stages. James Milner and Roberto Firmino were also denied by the Belgian's fine goalkeeping before the night was out.

What a defensive partnership!

Real Madrid have dealt with Salah, Firmino, Sadio Mane, Diogo Jota, Lionel Messi, Antoine Griezmann and Ousmane Dembele in the space of a week... and they've done it without Ramos and Varane. Nacho and Eder Militao have struck up a superb relationship at the centre of the defence and they were at their best on Merseyside.

Real Madrid no longer have the best squad in Europe, but Zidane has led them to within two games of Istanbul. The French coach has had his critics at times this campaign but, as he demonstrated over the two legs against Liverpool, you can trust him to get his team through the toughest tests.

Valverde is not a right-back

Fede Valverde was asked to play an unnatural role at Anfield, starting as a right-back in the absence of Lucas Vazquez and Dani Carvajal. He certainly did his best but sometimes struggled to cope with the likes of Mane and Andy Robertson.

What kind of a welcome was that?

Real Madrid arrived at Anfield in the midst of smoke and flares, with a broken window on their team bus for their troubles. For the supposed best fans in the world, Liverpool must be ashamed of what happened outside Anfield.