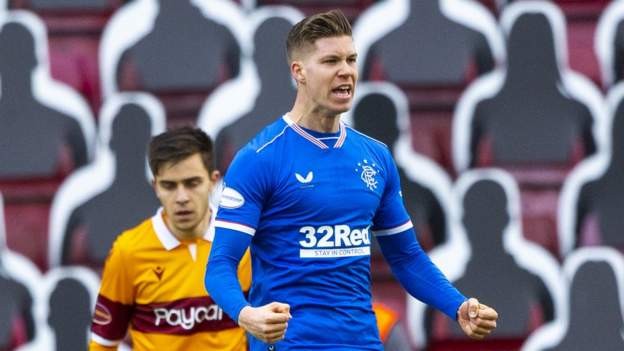 Cedric Itten rescued a draw for Scottish Premiership leaders Rangers against resolute Motherwell to restore their 21-point lead over Celtic.

The substitute headed in Borna Barisic's cross and scored against Well for the fourth time this season.

Devante Cole had put the hosts ahead in the first half from Tony Watt's cross.

Itten's leveller prevented Motherwell becoming the first side to beat Rangers in the league this term, with the hosts moving off bottom spot.

Cole also temporarily kept his team in front by clearing Connor Goldson's header off the line.

Graham Alexander made it two draws out of two since taking over at Motherwell, who are only the third team to take points of Rangers this season and are ahead of bottom side Hamilton Academical on goal difference. The Steelmen also have games in hand over the sides around them.

Rangers' sequence of 15 successive league wins comes to an end and defending champions Celtic could cut their deficit to 18 points when they visit Livingston on Wednesday.

It was a quiet opening from both sides and Motherwell netted at the end of a concerted period of possession with Watt delivering low for Cole to knock home in the six-yard box. Cole had been involved earlier in the move and was rewarded for carrying on his run.

Rangers had barely carved out an opportunity until Barisic's excellent cross from the byeline was headed just wide by Alfredo Morelos.

That chance perhaps showed the visitors how best to attack but instead they persisted with low crosses that were mopped up gladly by the Well backline.

Ianis Hagi volleyed wide after the break and another from team-mate Steven Davis - making his 300th Rangers appearance - was blocked.

Ryan Kent burst inside from the left to test Well goalkeeper Liam Kelly and the pattern for the second half was quickly being established.

Cole then prevented a goal by clearing Goldson's header at a corner and Goldson's next effort, a shot, was kept out by Kelly.

But Rangers finally found the right formula when Barisic's cross from deep on the left was nodded in by Hagi's replacement Itten. Alexander said post-match he felt the Swiss striker was offside.

The visitors continued to push as legs tired on both sides and Jermain Defoe, who had come on for Morelos, drew a save from Kelly deep into stoppage time.

Man of the match - Tony WattWatt (right) set up the Cole goal and worked tirelessly for his team in defence and attackWhat did we learn?

Motherwell had led and created chances in their draw with St Mirren last weekend and it will be a frustration for Alexander that they were again pegged back.

Rangers' defensive record this season has been strong but they have lost more goals on average as the season has worn on.

The Cole goal was reminiscent of Callum Lang's opener for Motherwell when the Steelmen lost 3-1 at Ibrox - a low ball from a wide area - and it is unlikely to have gone unnoticed by future opponents.

Going forward, the intricate passing that had been the catalyst for Rangers' goals in last week's win over Aberdeen was largely nullified by Alexander's tactics. Still, they persevered and got the goal their endeavours merited.

What did they say?

Motherwell manager Graham Alexander: "But for a potential offside goal, we win the game. At the time I couldn't see it but I've seen a still in the camera and he's offside it looks like to me.

"I have pride in the team, in the players, in the club, really, because there was a lot of help behind the scenes to prepare for this game. I thought the team were fantastic. It's another point on our total. The two games that we've had, we're unbeaten."

Rangers manager Steven Gerrard told Sky Sports: "I don't think we've got any complaints in terms of the result. It took us 45 minutes to come to the game. I'm disappointed with our showing in the first half.

"We got into them at half-time, had to make a substitution to send a message as well. I thought we were really good in the second half. Cedric's come on and scored a good goal. The lads showed a lot of belief and character."

Devante Cole (Motherwell) wins a free kick in the attacking half.

Attempt missed. James Tavernier (Rangers) right footed shot from outside the box misses to the left. Assisted by Joe Aribo following a corner.

Borna Barisic (Rangers) wins a free kick in the defensive half.

Bevis Mugabi (Motherwell) wins a free kick in the defensive half.

Attempt missed. Allan Campbell (Motherwell) right footed shot from outside the box misses to the right following a corner.

Steven Lawless (Motherwell) is shown the yellow card for a bad foul.

Leon Balogun (Rangers) wins a free kick in the defensive half.