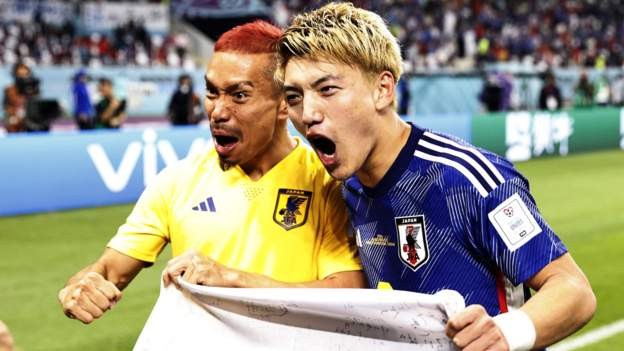 Japan must "fight like Samurai" when they face Croatia in the World Cup last 16 on Monday, says defender Yuto Nagatomo.

Japan stunned Spain and Germany to win Group E and reach the knockout stage for a fourth time.

Croatia, runners-up in 2018, stand in the way of Japan's first World Cup quarter-final.

Nagatomo said that "the first condition is to have courage" at the Al Janoub Stadium in Qatar.

"Before they go into battle they (Samurai) polish their weapons and try to improve their techniques," he said.

"But if they are scared during battle, they would not be able to use those weapons and techniques fully.

"It's exactly the same with football. Of course the tactics and techniques are important, but no matter how much we have improved those, if we are scared when we are on the field, those things are useless."

Croatia failed to score against Morocco and Belgium, but a 4-1 over Canada ensured they progressed as Group F runners-up.

Manager Zlatko Dalic said of Japan's stunning 2-1 win over Spain: "When Spain scored the opening goal, I thought Japan were finished, but they never gave up and deserved their victory.

"The fact that Germany, Belgium and Denmark have all been eliminated illustrates just how strong other teams have been at this World Cup.

"In the past, I might have picked Japan as an opponent that we would want to play, but they have defeated both Germany and Spain. This certainly will not be an easy game for us."

Who is through in World Cup and who could join them?World Cup TV coverage guide

Japan defender Ko Itakura is suspended so Takehiro Tomiyasu is in line to replace him as he is now fit enough to start, having been hampered by a hamstring injury at the start of the tournament.

However, Takefusa Kubo missed training on Saturday due to muscular discomfort, while Hiroki Sakai is still troubled by the thigh problem he picked up in their match against Germany.

Croatia boss Zlatko Dalic made just one change during his side's three group stage games and could again stick with the same team that played against Canada and Belgium.

No-one predicted Japan would get out of their group or that Germany would be knocked out - well, no-one apart from me.

I don't think the Blue Samurai are done at this tournament yet, although I can see this tie going the distance and all the way into extra-time before they win it.

I am maybe being a little romantic here, because Croatia have some canny operators and fantastic players.

Japan are probably a better team than they think they are, with the technical players they have. At the moment they play in patches but that might still be enough.

This will be the third World Cup meeting between the sides. Croatia won 1-0 in 1998 and they drew 0-0 in 2006, both in the group stage.Japan were knocked out in the last 16 by Turkey in 2002, Paraguay in 2010 and Belgium in 2018. The only Asian nations to reach the World Cup quarter-finals are North Korea in 1966 and South Korea in 2002. Croatia have lost only two of their eight World Cup knockout games (W4 D2), and they progressed from the two drawn matches on penalties - both in 2018.Japan averaged only 32% possession across their three group games. Their two wins over Spain and Germany came with 18% and 26% possession respectively.