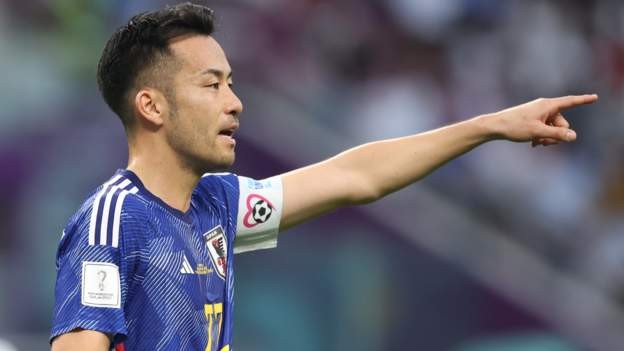 Japan must make sure they "don't dance badly" and undo their shock win against Germany when they face Costa Rica on Sunday, says captain Maya Yoshida.

That 2-1 victory means a win over Costa Rica could guarantee progress to the last 16 depending on the result of the Spain-Germany game.

It would be the fourth time in the last seven World Cups the Asian side have progressed to the knockout rounds.

"Make no mistake, when you win you feel more comfortable," said Yoshida.

"We have to stay calm, prepare well and concentrate on the plan to get us the win.

"The spotlight is on us after the last game and we have to make sure that we don't dance badly. We're not through yet."

Yoshida said he expects Costa Rica, who were battered 7-0 by Spain in their opening game, to "really go for it".

'We want to build our own style by learning from others'

Eight of the Japan squad ply their trade in the top two divisions in Germany, including goalscorers Ritsu Doan and Takuma Asano in their opening-game win.

"Japan wants to build its own style by also learning from other countries," said coach Hajime Moriyasu.

"We are grateful to German football for their cooperation.

"Their coaches and our players [playing in Germany] have been helping us to grow and we continue learning from them."

I am dining out on my prediction that Japan would beat Germany in their first match - I actually appeared on Japanese TV to talk about it.

As for Costa Rica, well they looked seriously poor against Spain, but Spain can do that against teams with their possession and make you look silly. We might see a very different display if they get on the ball here.

I would still back Japan, though. Win and they are probably through to the last 16, so they have that prize to play for.

Japan have never lost in four previous meetings with Costa Rica in all competitions (W3 D1), netting exactly three goals in all three victories in this run.Costa Rica won their only previous World Cup game against an Asian nation, beating China 2-0 in 2002 .After beating Germany 2-1, Japan are looking to win back-to-back World Cup matches for the first time since 2002 (v Russia and Tunisia), while they have never won both of their first two fixtures of a single edition at the finals.Costa Rica lost their opening match 7-0 to Spain, conceding as many goals in that match as their previous eight games at the tournament combined beforehand.Since beating both Uruguay and Italy in their group in 2014, Costa Rica are winless in seven World Cup games (D4 L3), failing to score in five of those matches.Against Spain, Costa Rica didn't manage a single shot, with this being the second instance of a side failing to record a shot in a World Cup match since Opta had this data (from 1966), with the other occasion also Costa Rica against Brazil in 1990. Meanwhile, Japan faced 26 shots in their 2022 World Cup opener against Germany, the most they have ever faced in a match at the tournament.