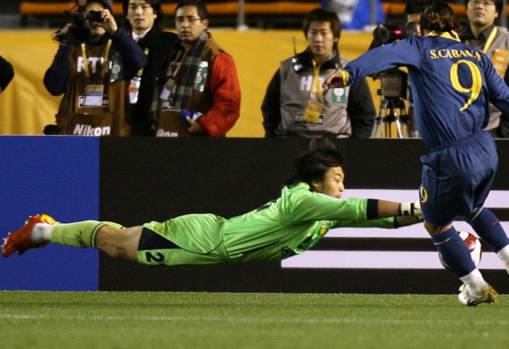 Osaka: On December 11, 2006, Jeonbuk Hyundai Motors took on Club America in the quarter-finals of the FIFA Club World Cup, ten years to the day when both sides will meet again at this year's tournament. The showdown in Tokyo a decade ago was, according to Jeonbuk goalkeeper Kwoun Sun-tae, “a battle between David and Goliath” as the upstarts from Korea Republic fell to a 1-0 defeat at the hands of the Mexican giants.

Now, with a last-eight rematch against America looming in Osaka, the only remaining members of the Motors side that faced the likes of Claudio Lopez, Guillermo Ochoa and Cuauhtemoc Blanco have been telling FIFA.com how much the club has changed over the past decade. Kwoun, who is now the captain, and defender Choi Chul-soon joined Jeonbuk in 2006 and have stayed through thick and thin over the subsequent 11 seasons. Unfortunately, however, the former has been ruled out of the squad for Japan 2016 due to an injury suffered during the AFC Champions League final second leg against Al Ain last month.

“The Club World Cup is not a tournament you can take part in every day, because you have to win the Champions League in the first place,” Kwoun said. “It thrills me even to imagine myself playing on the stage, so it’s a shame I cannot make the trip this time around.”

Choi will be sympathetic of his colleague’s disappointment, for he too suffered an injury blow at this tournament. “My first Club World Cup was something I’d like to forget about, because I was injured during the first match against Club America,” he explained, referring to an ankle knock that cut short his first journey to Japan.

"This time we’ll be well prepared to show the rest of the world what Jeonbuk’s football is like," Choi insisted. "I’m going to enjoy the tournament, and hopefully we’ll play our own game so the fans would also enjoy watching how we play. We focus on the attacking side of the game. Even defenders like myself join the attacks and we try to score as many goals as possible.”

“If we concede three goals, then we score four – that is the Jeonbuk style,” Kwoun explained. “Football is all about scoring more goals than the opposition, and getting the result. That’s what our coach has told us all the time, and that’s our culture. I think that’s also what the fans would like to see from us. It can be tough for a goalkeeper, but we keep trying to score more goals than we concede.”

Ready for redemption
Despite the absence of some of their key players, himself included, Kwoun believes Jeonbuk are more than capable of competing at these global finals. They are, he says, better equipped than ten years ago, when they struggled after inspirational winger Yeom Ki-hun was called away for national team duty.

“We had to start from scratch when we arrived here in 2006,” he said. “I think it’s fair to say that we were just like a castle made of sand. If someone went off, the team collapsed in terms of organisation. But this team is different.”

Choi agreed, saying: “We’ve acquired some good players in recent years and I think it has paid off. And we’ve also got a good balance: the players are willing to make sacrifices in their positions and give more than is required in their roles. Because of that, we’ve come to win more games while playing better football, attracting more fans and winning more titles. I think we’re setting a good example for Korean football.”

“When we won the Champions League in 2006, it was like breaking a rock with eggs,” Kwoun recalled. “And it took three more years for us to win our first national championship in 2009, which was a turning point in terms of local people taking a real interest in football. Our long-term plan began to bear fruit in 2009.”

It would certainly be unwise to underestimate this Jeonbuk side, especially with Choi so eager to achieve redemption ten years on. “I think the most important thing is how we approach the game mentally,” he said. “Nobody wants to lose, and we will give all we’ve got in order to win.”