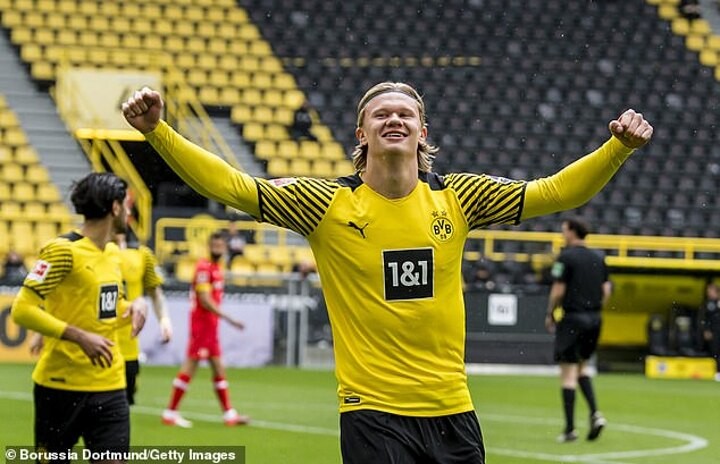 Erling Haaland should forget about a future move to the Premier League because he won't be able to bully the likes of Brighton's defence, according to John Barnes.

Former Liverpool star Barnes has offered his controversial and rather bizarre opinion on the Norwegian superstar, as speculation continues to build regarding a future move to England's top tier.

The mercurial rise of Haaland at Borussia Dortmund has drawn links with the likes of Manchester City, United and Chelsea, along with the top teams in Spain, Italy and France.

Both Real Madrid and Barcelona are already known to have held meetings with the player's agent Mino Raiola.

Yet Haaland has been tipped to follow in the footsteps of his father Alfie - who played for Nottingham Forest, Leeds and City in England - but Barnes feels he would be better served by focusing his attention on La Liga.

Speaking to bettingOdds.com, Barnes said: 'I think Haaland would be better suited to one of the big clubs in Spain.

'It's interesting because if you look at him as a player, he is a very physical player and he bullies a lot of the players in Germany. In Spain you can do that but in the Premier League you can't.

'In the Premier League a physical player is nothing because we have loads of physical players and not enough technical players, so if Haaland comes to England he's not going to go and bully Brighton's centre-backs, so for that reason I think he would have a much bigger impact in La Liga.'

Haaland has been noted for his brute strength and impressive muscular development despite being only 20-years-old, yet Barnes remains unconvinced.

The former England international feels Haaland's big move could arrive this summer, despite Dortmund's public insistence that they are not yet ready to sell, and is of the opinion that the striker is in a worse position than his European rival Kylian Mbappe when it comes to current chances of success.

'As much as they say they'd want £150 million, do you honestly think a club like Dortmund would turn down an offer of £80-£90 million?

'I think it would cost less for one of Erling Haaland’s suitors to get him over the likes of Kylian Mbappe.

'Mbappe has proven it during his four years with Paris Saint-Germain, whilst Erling Haaland has only been doing it for the past year or so at Borussia Dortmund.

'I think Haaland moving on is much more likely than Mbappe as PSG will remain a top club and will be challenging again next season, so if Mbappe stays it’s not going to hurt his career at all.

'If Haaland stays at Dortmund another year then he could potentially score less goals and they may do nothing in Europe and then Dortmund would have missed the opportunity to make more money on him,' he added.