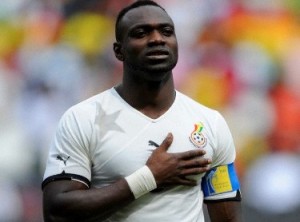 Defender John Mensah was conspicuously missing in Wednesday morningâ€™s training session as we are being told he has suffered a thigh strain.

The Black Stars captain was said to have suffered the injury before being sent off in Tuesdayâ€™s opening Group D win over Botswana.

This means Mensah, 29, was playing through the pain barrier throughout the game against the Zebras and only got some relief when he was red carded.

Team doctors will seek to get further hypothesis on the injury by taking Lyon defender to the hospital later in the day after which diagnosis will be made.

"We will take John Mensah to the hospital this afternoon for MRI scan to find out the severity of the injury," Ghana team doctor Percy Annan said.

"He has some pain in this lower left thigh and that is why he is not training today."

Mensah's injury record in recent times has been very poor but hopefully he will recover in time to return to action for Ghana at the quarter final stage where he will be eligible to play if the Black Stars qualify.