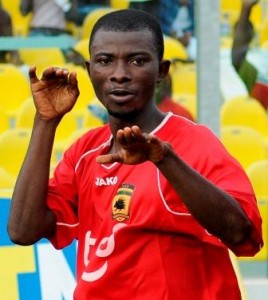 Jordan Opoku has been handed the Asante Kotoko captaincy for the upcoming seasonÂ  under new coach Ebo Mends.

The 26-year-old has been rewarded for his work ethic and discipline since moving to the Kumasi-based club from Gomoa Fetteh Feyenoord.

Opoku has had loan spells at Excelsior and Royal Antwerp and also played for Dutch giants Feyenoord Rotterdam.

The midfielder was a member of Ghana's squad that won silver at the maiden CHAN tournament in Ivory Coast last year.

He takes over the armband from Burkinabe goalkeeper Soulemana Abdulaye.

First choice goalie Isaac Amoako who skippered the club for the better part of last season, will deputize for him and defender Ofosu Appiah is third-in-command.

Meanwhile veteran Stephen Oduro has been appointed as the general captain.