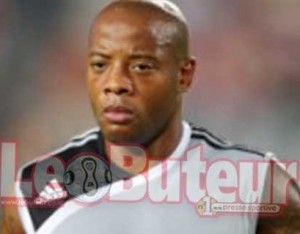 Ghana striker Junior Agogo is closing in on a move to Scottish Premier League side Hibernian after the club boss Colin Calderwood, revealed he is excited about the striker's form.

Agogo, 31, has been on trial at Easter Road Park for a week now and is now awaiting his clearance to finalise a move to the club.

Calderwood, who coached Agogo at Nottingham Forest, says the former Zamalek striker's arrival is a boost for his attack and is waiting for his clearance.

"Junior is still here; we are waiting for clearance to get him ready to be available for us.

"He is in good condition, actually, so there was a little hold up in not being able to play against Falkirk.But ongoing, I think it will be very exciting for us," he said.

Agogo last played for Ghana two years ago in a World Cup qualifier against Sudan in Khartoum and has netted 12 times in 27 caps for the Black Stars.