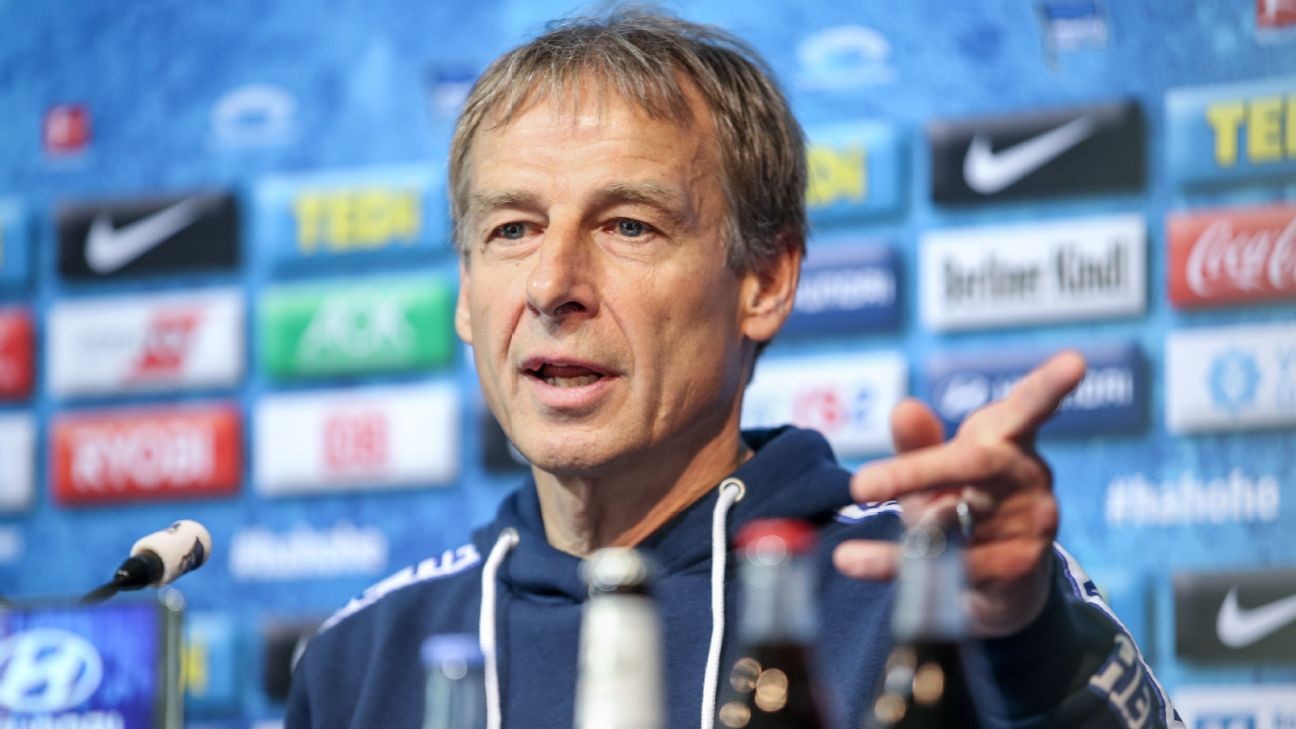 Craig Burley and Ale Moreno react to Jurgen Klinsmann's bold claim regarding the USMNT and the 2018 World Cup.

Jurgen Klinsmann speaks exclusively to ESPN about how much the U.S. are set back after missing the 2018 World Cup.

Jurgen Klinsmann says there's "much more to come" from Christian Pulisic at Chelsea and with the USMNT.

Hertha Berlin head coach Jurgen Klinsmann has left his role at the Bundesliga club after less than three months in charge.

The former Bayern Munich, Germany and United States coach confirmed his departure in a statement posted on his Facebook page and said he will remain at the club in a supervisory role.

"I would like to say a big thank you to all players, fans, spectators, staff and employees of Hertha Berlin for the support, the many meetings and the talks over the past ten weeks," he said.

"It was an incredibly exciting time for me with many new interesting insights. The club and the city have grown on me even more.

In late November, we followed the request of the club leadership with a highly competent team and helped out during a difficult time. Within a relatively short period of time we set out on a good path. Also because of the support of many people we put six points between us and the relegation playoff place despite mostly difficult games."

- ESPN+ gets Bundesliga rights starting in 2020

"I am more than convinced that Hertha will reach its goal to stay up," he added.

"But for this job, which is not done yet, as the head coach I need the trust of the acting persons. Especially in a relegation battle unity, team spirit and focus on the basics are the most important elements. If they are not guaranteed, I can't live up to my potential as a head coach and fulfil my responsibility.

"That's why, after long consideration, I have come to the conclusion that I will leave my post as the Hertha Berlin head coach and return to my initial long-term task as a member of the supervisory board. The supporters, the players and the employees have grown dear on me in this time and that's why I will continue to cheer for Hertha.

"I continue to look forward to the many meetings with you in the city or in the stadium."

Hertha are 14th in the Bundesliga, six points off the relegation places.