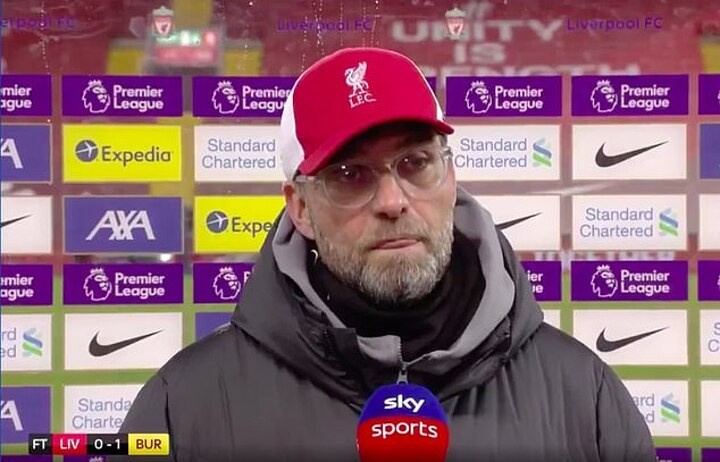 Jurgen Klopp took full responsibility for his side losing to Burnley at Anfield and surrendering their historic run stretching back almost four years, but admitted he thought it was 'impossible' for his side to lose.

Liverpool remained in control throughout the contest on Thursday night and finished the match having had 72 per cent of possession and 27 shots, but were undone by a late penalty converted by Ashley Barnes.

Speaking to Sky Sports following the final whistle, Klopp retained his cool but pointed out that he thought a game which had played out in such a way was 'impossible to lose.'

Klopp said: 'We lost the game which I think is pretty impossible to lose but we did it. And that's my fault because my job is to make sure the boys have the right feeling and having the right amount of confidence and they make the right decisions.

'We had the ball a lot, we created some situations it was all ok but in the final moment out decision making is not right at the moment. We need the ball in the right places but then we don't get the shot away.

'I said the same thing last week. The problem is something doesn't work, we need to try harder and make better decisions. But it didn't work out tonight, we have to admit that. Nothing else to say and that's why we lost the game.

'It's always my fault, the things that don't work are my fault. We've worked together for a long time now.'

Liverpool had not experienced defeat at Anfield in the league since April 2017, when Crystal Palace left with all three points in the infancy of Klopps' reign.

The defeat means Liverpool have now dropped 12 points from their last five matches, and have dropped off the pace in the title race as a result.

After 19 matches played Klopp's reigning champions sit in fourth place in the table, having amassed 34 points.

Liverpool are now six points behind leaders Manchester United and four behind Pep Guardiola's Manchester City, who have a game-in-hand.