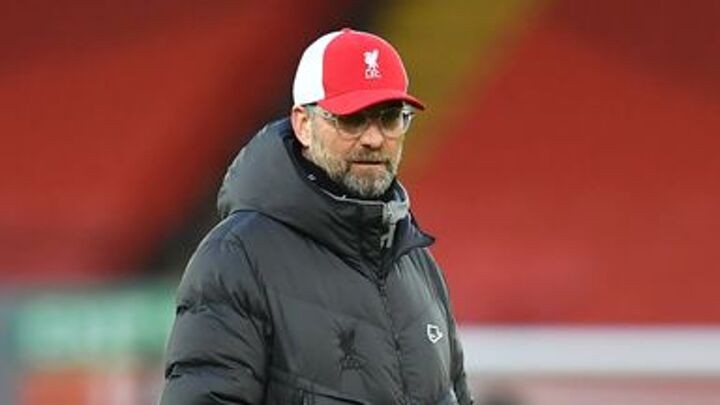 Jurgen Klopp says Liverpool must focus on finishing in the Premier League's top four before they worry about their title defence.

A goalless draw with Manchester United saw Liverpool drop to fourth in the table after a third successive league game without scoring.

Liverpool sit just a point above fifth-placed Tottenham and two ahead of Merseyside rivals Everton, who have a game in hand.

Klopp believes qualifying for next season's Champions League is not a given for the Premier League champions.

Following the match at Anfield, he said: "For me, it's not important where we are in the moment - it's important that we have points and we are around this group (top four).

"For that you need points. We are in the middle of a bunch of teams which fight for this spot and that's what we have to do.

"It's not about if we don't become champions, it's not fun anymore. We just fight for everything and I saw that tonight again.

"The most important thing is to qualify for the Champions League and I know how difficult it is. This season it will be a tough race for the top four."

United retained their position three points clear of Liverpool, who they meet again in the FA Cup next Sunday, at the top of the table.

They had chances to win the match but for Liverpool goalkeeper Alisson, who made two vital late saves to deny Bruno Fernandes and Paul Pogba from close range.

The draw allowed last season's runners-up Manchester City to leapfrog Liverpool into second, with a 4-0 victory over Crystal Palace. They also have a game in hand.

Liverpool and Manchester City meet at Anfield on February 6 in what will be a key fixture in the Premier League title race.

Who will win the Premier League title?

With the Premier League title race closer than ever, Sky Sports pundits Gary Neville, Roy Keane, Graeme Souness and Micah Richards assess who could end up on top.

Manchester United remain top after drawing 0-0 with Liverpool on Super Sunday, but Manchester City are hot on their heels after beating Crystal Palace 4-0 later in the day. They are currently two points behind in second with a game in hand.

Current title holders Liverpool have slipped in fourth, a point below Leicester on goal difference, while Tottenham, Everton and Chelsea remain in touch of the top four.

But with five points separating first and sixth, who will end up on top when the season concludes in May? After a busy weekend of action on Sky Sports, the pundits gave their verdicts...