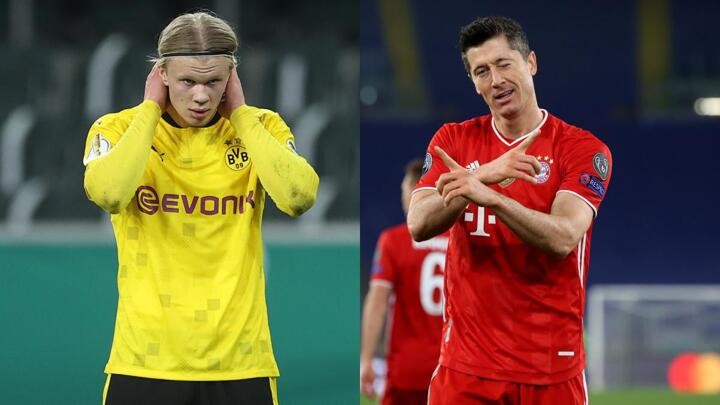 Borussia Dortmund and Bayern Munich meet in Der Klassiker on Saturday where few would bet against Robert Lewandowski or Erling Haaland finding the net.

When Borussia Dortmund parted with a reported €20million to sign Erling Haaland from Salzburg a little over a year ago, they'll have been acutely aware of the coup they'd just struck – but whether they expected him to be quite this good is another matter entirely.

Those explosive first few months of the 2019-20 season at Salzburg left most of Europe's biggest clubs clamouring for the Norwegian, but Bayern were seemingly not among them. At least, not in the final straight.

While you can't necessarily have too many great players, few at the time or since have questioned Bayern's lack of interest in the striking sensation, and that purely comes down to the presence of Robert Lewandowski.

Eleven months on from Haaland's Dortmund debut, Lewandowski won the FIFA Best Men's Player award having scored 60 goals across the qualifying period and led Bayern to a treble.

But the fact Haaland - named the Golden Boy soon after - was seen as unfortunate not to be nominated for the major gong ultimately won by Lewandowski is testament to the former Molde youngster's frightening potential.

Saturday's Der Klassiker is unlikely to have much bearing on Dortmund's Bundesliga title hopes given they'll still be 10 points behind Bayern even if they win, but the game does provide the opportunity to see the two sharp-shooters pitted against each other, like gunslingers in an old Western movie.

Haaland, along with Kylian Mbappé, is being outlined as the world's next great number nine, but is he already ahead of even Lewandowski?

Lewandowski's long road to the top

It's easy to forget Lewandowski's backstory and route to the top, simply because he has been one of Europe's most-feared strikers for so long.

But Lewandowski's tale is one of rejection, perseverance and mastery – to say he always looked destined to reach the level he has would be revisionist. After all, the early years of his career in Poland were impacted by the death of his father, being cast aside by Legia Warsaw, a serious injury and failed transfers.

Sporting Gijon turned him down and the 2010 eruption of Icelandic volcano Eyjafjallajokull famously resulted in the collapse of a move from Lech Poznan to Blackburn Rovers.

He joined Dortmund in June of that year, a couple of months before his 22nd birthday – by comparison, Haaland was still six months from turning 20 when he signed for BVB.

On top of that, Haaland's early impact on the Bundesliga has been far superior to that of Lewandowski, whose first season yielded only nine goals in 42 games across all competitions. The Norwegian managed 24 in 27 matches.

Looking at that alone, it's easy to make the assumption that Haaland is destined for even greater things than Lewandowski, but it's worth pointing out the Pole was played out of position a lot in his first campaign.

"I was annoyed having to play as a number 10 instead of playing up front as the number nine," Lewandowski told the Daily Mail in 2016. "I played the whole season as number 10. The following season I thought about why I was in that position, then I realised my game had improved. I learned a lot and, when I played up top again, I realised playing as a number 10 had made me a better player."

The data backs him up as well. Not only did his overall productivity in front of goal improve from nine goals to 30, he was proving more consistent generally in those decisive moments, his conversion rate increasing from 8.5 per cent to 19.5.

Haaland's Bundesliga stay could be brief

When looking at – or comparing – any player in relation to Lewandowski, you have to consider the two different versions of him; pre-26 and post-26.

It was around this age that Lewandowski began to harness the fitness and nutrition expertise of his wife Anna, and it's quite easy to spot when that appeared to start paying dividends, as his goals haul rocketed from 25 to 42 in 2015-16.

He has not gone below 40 in any full season since then and already has 34 to his name in 2020-21 (32 appearances) – he is also just four behind Klaus Fischer (268), the second most-prolific player in Bundesliga history.

Haaland's long-term future isn't at Dortmund and, by extension, doesn't appear to be in the Bundesliga, so matching Lewandowski's record in Germany's top-flight looks unlikely.

But what's clear is he has found this 'world-class' level much earlier than Lewandowski – Haaland has more goals (55) across all competitions than any other current under-21 player in Europe's top five leagues despite playing just 57 games. Jadon Sancho is his closest rival with 46 in 130 appearances.

Haaland's first Bundesliga season with Dortmund saw him score 13 times, outperforming his expected goals (xG) by 4.2 – that's a greater differential than Lewandowski has recorded since 2016-17 (7.8), though the youngster's figure here has dropped to 2.5 in 2020-21.

While that is 0.7 less than Lewandowski's 3.2 xG differential, either way he's scoring a lot of goals and more than he would ordinarily be expected to over a long period of time, which speaks for his clinical nature.

Further to that, Haaland – who earlier this term became the youngest player to net four in one Bundesliga game (20 years, 123 days) – boasts a stunning conversion rate at Dortmund. Last season's 41.4 per cent (all competitions) is better than Lewandowski has ever managed, though it was of course limited to half a season.

In 2020-21 he hasn't quite found the same standard, yet his 29.7 conversion rate in all competitions is still better than any other Bundesliga player with 10 goals or more. By comparison, Lewandowski's 28.3 per cent will be a career-high for a single season if he maintains it.

At the very least, Haaland is already a contemporary of Lewandowski's – his effectiveness in front of goal is utterly devastating and, as demonstrated, seemingly a level above that of the Bayern talisman during his early Bundesliga days.

But the challenge for Haaland is to maintain that level and keep kicking on, as Lewandowski clearly did around the age of 26 when analysing what he could do better, taking himself from an excellent number nine to arguably the best of his generation.

Haaland is building from a higher platform than Lewandowski ever was, therefore one has to suspect he has the potential to surpass his exploits.

Maybe he could be this generation's standard-bearer. If he has half the amount of perseverance as Lewandowski, that'd be a good start.

As for whether he's already better than Lewandowski – well, part of the Bayern man's brilliance is his longevity and consistency, how he seems to be getting better with age. But for Haaland to be rivalling the world's best before he's even 21 is an achievement in itself.