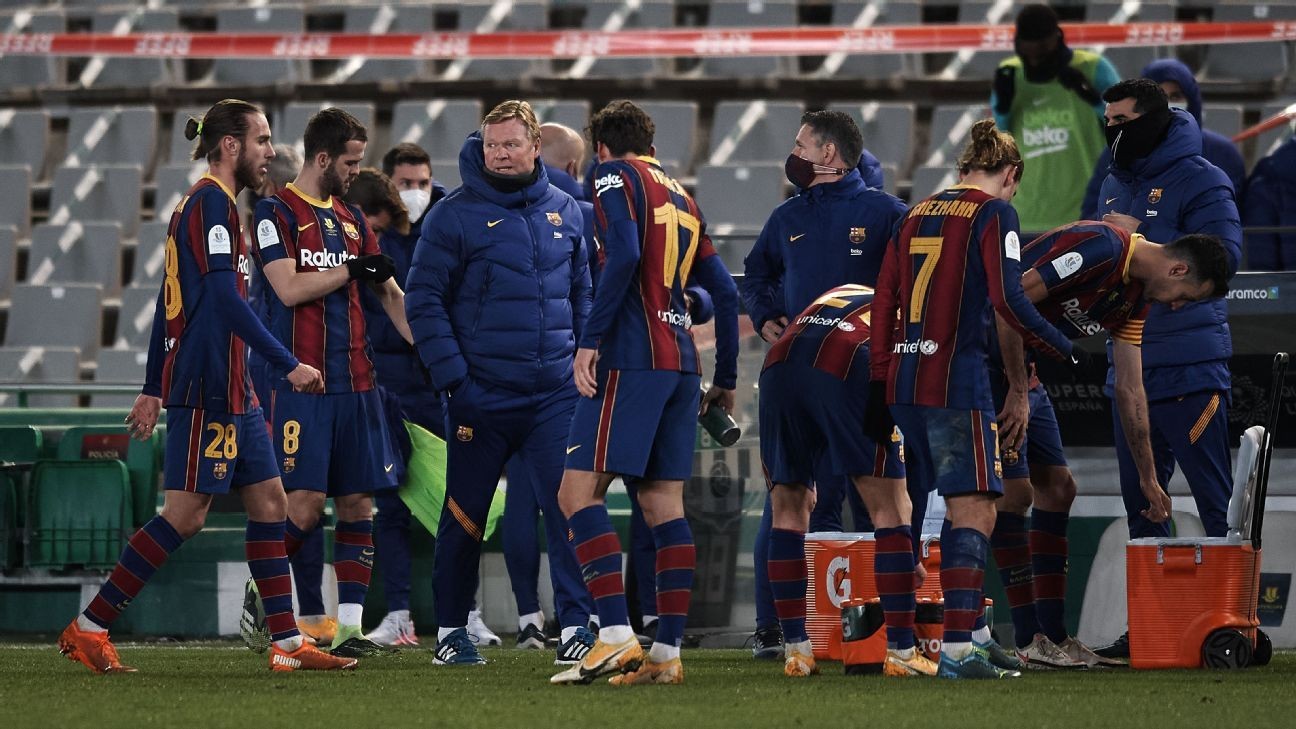 Barcelona coach Ronald Koeman has said himself and the squad have all played their part to help ease the club's financial crisis.

In addition to money owed to creditors, the accounts also revealed the club still owed over €320 million for players they have signed in recent years, including Philippe Coutinho (€69.2m owed) and Frenkie de Jong (€64m).

To help ease the club's cash crisis, Koeman and the players have agreed to a number of wage reductions and deferrals to relieve the strain on the accounts.

"I think Barcelona are one of the big clubs, in terms of COVID-19 and empty stadiums, that is suffering more than other clubs," Koeman said in a news conference on Tuesday.

Ronald Koeman has said that the pandemic has seen Barcelona struggle financially. Photo by Jose Breton/Pics Action/NurPhoto via Getty Images

"No tourism affects the club's situation a lot as well. All big clubs' numbers are not good at the moment, it's not just here, but I don't think it affects the players. They're focused on their jobs.

"That's all we can do, focus on winning games. We know it's a complicated situation and we have all helped the club with salary reductions."

Chelsea fans' 'In Frank We Trust' banner isn't the first to backfireBarca's De Jong 8/10 vs. Elche as influence continues to grow

Barca announced in October their net debt had doubled to €488m but the annual report suggests things are even worse than they have previously stated.

Spanish radio station Cadena COPE reported on Monday that they are behind on player payments, despite agreements over reductions and deferrals, but Koeman said he wasn't sure that was true.

"I know things come out sometimes that aren't true so I would have to ask about that, I don't know," he added.

Koeman was speaking ahead of Wednesday's game against Rayo Vallecano in the Copa del Rey. He will have Lionel Messi back for the tie after the club captain was forced to serve a two-game ban for getting sent off in the Spanish Supercopa final defeat to Athletic Bilbao.

"Leo is always hungry to play and to win things," Koeman said when asked if Messi would start. "He is used to winning trophies. He is a winner and wants to play every game.

"He had a slight injury before but he is eager to get back in action after his ban. He is fresh and he doesn't have any fitness issues. To win things we need Messi in form."

Barca will reach the quarterfinal of the cup with a win over Rayo and are the favourites for the competition following the elimination of Atletico Madrid and Real Madrid in previous rounds.

"I don't think we have more of a chance because they're out," Koeman disputed. "As we saw in the Supercopa, there are other very strong teams.

"It could even be an advantage for Atletico and Real because they get more rest. But I prefer to be playing in all three competitions with the chance to win something. We're in it to win it."