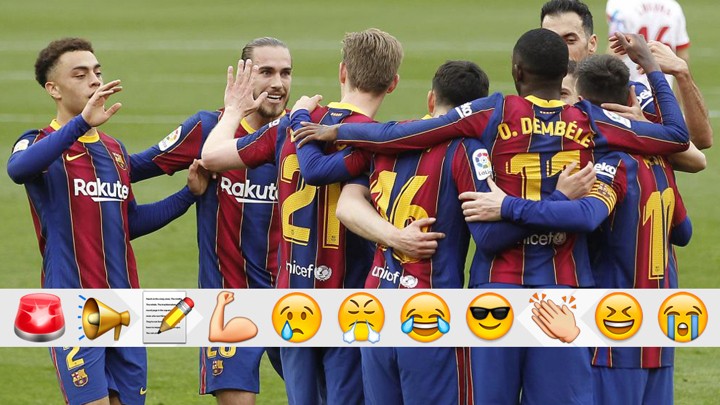 Ronald Koeman's decision to switch to a back three has liberated the firepower that could propel Barcelona into a title race in LaLiga Santander.

Ousmane Dembele and Lionel Messi proved too dangerous for Sevilla as they scored a goal each to send the Blaugrana to within two points of leaders Atletico Madrid.

Dembele was brilliant at the Estadio Ramon Sanchez Pizjuan, giving Jules Kounde a troublesome afternoon. The forward was free to drive forward because of the change to Barcelona's formation, with one of his attacking runs ending with the opening goal.

Barcelona had plenty of chances to finish the game before Messi netted their second goal late on. In another host of wasted opportunities, Sergino Dest hit the post and Messi himself sent Dembele's cutback high over the crossbar.

Gerard Pique could only manage 67 minutes as he started to feel the strain of an injury problem. His replacement, Ronald Araujo, making his own return from injury, was then forced off himself in the 77th minute. There was also Pedri, who went off injured in the 70th minute.

There were nervous faces in the Barcelona camp when Marc-Andre ter Stegen hurt his hand in the warm-up. Having been forced off for treatment, the German goalkeeper was eventually able to start the match, playing without problems.

Papu Gomez summed up Sevilla's first half in Nervion as he struggled to make any sort of impact on the game. There was no surprise to see him substituted at the break.