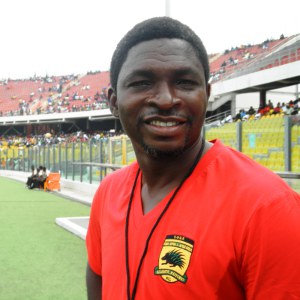 Asante Kotoko coach Maxwell Konadu was the first to make payment towards saving the club from the recently incurred liabilities.

The ex Ghana international made a payment of 100 Ghana cedis to kick start the fund raising process aimed at raising over 100,000 Euros.

The Kumasi-based club was earlier this week hit with a 30-day ultimatum to pay whooping 90,000 Euros to former coach Hans Dieter Schmidt for his wrongful dismissal in 2005.

Kotoko also have to pay Turkish side Gencelrbirligi $6,500 in refunds following the transfer of Adamu Mohammed back in 2008.

The club in both instances incurred an extra combined cost of 12,000 Swiss Francs in legal charges.

Failure to meet the deadline set by Fifa within the stipulated time could lead to their relegation from the Ghanaian topflight.

This comes at a time when Kotoko are riding high and are on the verge of sealing the Ghanaian league title under the leadership of Dr. KK Sarpong.

The club have thus launched a massive campaign to rake in the needed funds by way of contribution by primarily the Kotoko family and other well wishers.

Maxwell Konadu earned the accolade as the first contributor immediately the project was activated followed by the playing body.

Management is expected to make their contribution as well as the numerous Kotoko supporters across the globe.

Well printed coupons with security features will soon be in circulation for people to make their contribution and be duly registered.

Supporter heads in all regions are expected to converge in Kumasi on Sunday to take delivery of their quota for their respective places of jurisdiction.

Several vantage points will be mounted in the stadium for fans to make their contribution during Sunday's Premier League game with New Edubiase and will later be extended into the various cities.

Kotoko currently lead the Ghana Premier League table with a healthy 10-point lead and are bent on defraying any cost which could jeopardize their position.