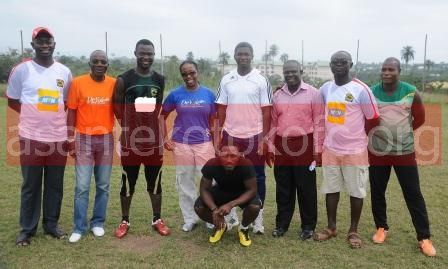 Asante Kotoko defender Gideon Baah has officially been cleared to play active football after an 18 month spell on the sidelines.

The left-back was handed over to the technical team in a short symbolic ceremony at the club's Adarko Jarchie Training ground last Saturday by experts from the DeYale Sports Centre .

Baah completely broke his leg during the Ghana Premier League derby against Hearts of Oak at the Baba Yara Stadium in March 2010.

He underwent three surgeries on the same foot and that slowed his recovery.

Dr. Angel Chambers and Mr. James Commey-Bortsie of DeYale Sports Centre, the rehabilitation centre that did the final work on Baah, assured coach Konadu and his assistants that the player was fit to play.

"You should not harbor any fear whatsoever when you decide to use him."

"Gideon has been physically healed and psychologically toughened to begin playing the sport of football again," Dr. Chambers added.

Konadu admitted he had seen some improvements in his return to fitness.

"Three to four months ago, Gideon though wanted to play had difficulty sprinting and even using the left foot to kick the ball. Now, I see a vast difference as he uses the foot now for everything in football," he said.

"I have seen him sprint beautifully and also seen some wonderful kicks from him and I can only be happy for him and the club.

"His full recovery now means that we are going to have more options per the usage of players."