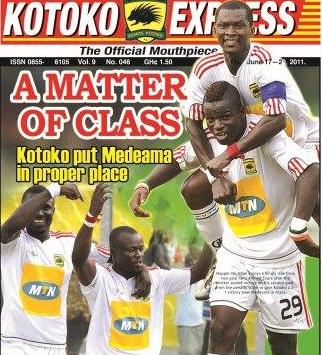 Both teams played out a barren draw after extra-time and Kotoko needed Stephen Oduro's fifth spot-kick to seal a place in the grande-finale.

It was face-salvaging win for Kotoko, who last played and won the competition a decade ago.

Kotoko will now meet Abedi Pele's Nania FC in the final to be played at the Accra Sports Stadium.

The Porcupine Warriors should have won in regulation time but poor finishing pushed the game into extra-time.

In the 35th minute, Kotoko mounted an attack from the left but Fatau Mohammed's low grounder but he hits the goal post.

In the 123rd minute, another chance fell the way for striker Alex Asamoah but his decision to chip it over the bar missed the target-perhaps the marauding presence of the on-rushing goalkeeper Dabuo confused him.

Before that a terrible back-pass by Sabato Mohammed but substitute Nawaf Alhassan could not direct past keeper Soulama.

The MTN FA Cup committee is yet to confirm the date for the grande finale.