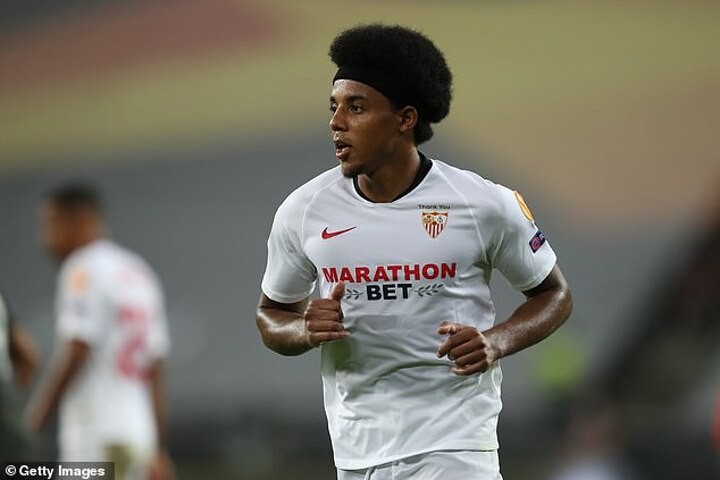 Sevilla defender Jules Kounde has admitted he was flattered by interest shown in him by Manchester City over the summer.

The 21-year-old was one of several centre-backs shortlisted by Pep Guardiola as they looked to strengthen their back-line.

City eventually settled on Nathan Ake from Bournemouth and Ruben Dias from Benfica, leaving Kounde to stay in Seville.

The French Under 21 international though says he was happy to remain at the LaLiga club.

'The interest of a club like City is always a good thing, but I'm at Sevilla and I'm very calm,' Kounde told Sevilla FC TV.

'I'm lucky to be at a club that competes at a very good level. We have a fantastic group of players and people.

'That wasn't a bad option, but I always told (Sevilla director of football) Monchi that I would not force anything.

'If everyone wasn't happy, I knew I had a contract here, playing in the Champions League.'

The youngster has been a regular for Sevilla since completing a £22m move from Bordeaux in July 2019.

Manchester City are just one of several top European sides who have been interested in Kounde, who has scored twice in 43 appearances.

Kounde is currently out of the Sevilla team after testing positive for coronavirus.

He has missed their last three games including the 0-0 draw with Chelsea at Stamford Bridge.

Kounde said: 'I feel good considering the circumstances. I'm at home and the time is dragging, but that's the way it is. I'm waiting for the test to come back negative. I haven't even lost my sense of smell and I'm totally asymptomatic.

"I miss both my teammates and football a lot. I am trying to take it philosophically and be patient, but it is somewhat different to the lockdown. I was alone in my house for two months, but there was no football and we were all in the same situation'