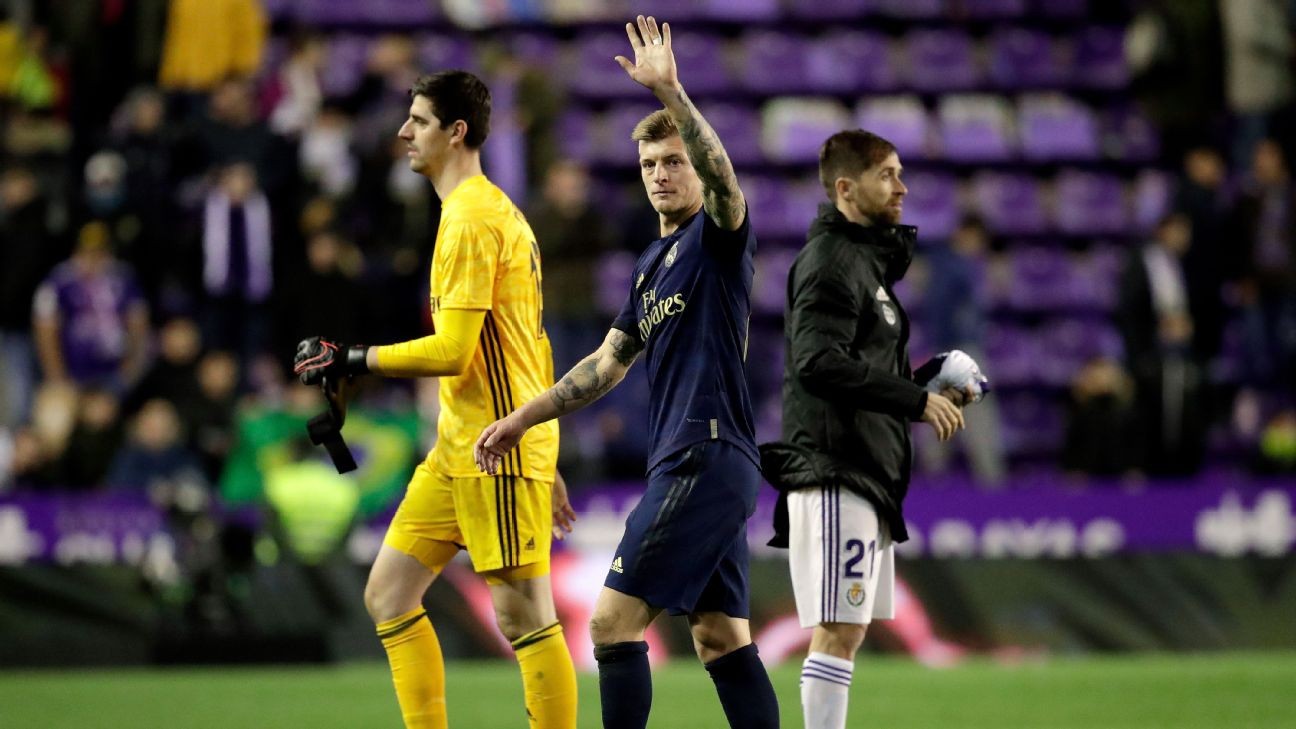 A header from Nacho gave Real Madrid a battling 1-0 win at Real Valladolid to go three points clear of Barcelona at the top of La Liga.

A mostly uneventful first half saw Casemiro have a goal ruled out by VAR when the Brazilian midfielder was adjudged to have been narrowly offside on a Toni Kroos' free kick.

Nacho opened the scoring in the second period with a header from another pinpoint Kroos delivery, before Valladolid striker Sergi Guardiola had a late equaliser ruled out for offsides.

Real Madrid simply had to take advantage of Barcelona's defeat at Valencia on Saturday -- and they did, eventually. They're on their own at the top of the table now and must be favourites to win the league as Barca go through the growing pains of a new coach and playing style.

Zinedine Zidane's Madrid seem to have the ability to find a way to win whether they're playing well or not. Here, they improved as the game went on, even if they were never fluent. Ultimately, it didn't matter. This was a very important three points against an awkward opponent.

Madrid's first-half display in particular was sluggish and uninspired. Their play lacked pace, variety and dynamism, perhaps no surprise given Zidane's team selection. Valladolid were perfectly happy to sit tight and let the visitors try to break them down.

In attack, the team are over-reliant on Karim Benzema and his goal drought must end soon. They are fortunate to have Kroos, whose ability to put dangerous balls into the box is unparalleled, and today it got them out of trouble.

7 -- Zidane made eight changes from the team that beat Unionistas de Salamanca in the Copa del Rey, with only Nacho, Casemiro and Benzema keeping their places. He set the team up in a 4-3-3 with Isco and Rodrygo either side of the French striker.

The problem was that with Nacho and Ferland Mendy at full-back and four central midfielders in the team, there was a real lack of attacking impetus.

Zidane's decision to leave Vinicius Junior out of the squad entirely was a little surprising given the lack of dynamism both in the starting XI and on the bench. Nonetheless the coach will have been delighted with the result, despite an at times frustrating performance.

GK Thibaut Courtois, 7 -- Another clean sheet on a very quiet night. Did well to deal with a Valladolid corner early on that could have crept in.

DF Nacho, 8 -- His goal won the game on just his fourth league start this season. Always an able deputy although his presence at full-back sometimes inhibits the team going forward. His run to celebrate scoring with Zidane, a coach who has frequently left him out of the team this year, was a positive sign.

DF Sergio Ramos, 7 -- Returned from injury and Real Madrid always look a better team with Ramos marshalling the defence. Did generally well against a lively Enes Unal and Guardiola.

DF Raphael Varane, 7 -- Along with Ramos, had to cope with Unal and got booked for his efforts. Got forward in the second half in an attempt to inspire Madrid in attack, too.

DF Ferland Mendy, 7 -- Continues an impressive debut season in a Real Madrid shirt. Has now started just under half of Madrid's league games, and it's hard to say if he or Marcelo is first choice. One really important second-half moment, blocking Guardiola's shot to prevent an equaliser.

MF Casemiro, 8 -- Perhaps the player Zidane is most reluctant to rest. Could have added to his brace against Sevilla last weekend when he thought he'd scored early on. Nominally the holding midfielder, but can just as often be found ahead of Luka Modric and Kroos as behind them.

MF Toni Kroos, 9 -- A sublime performance. Delivered a gorgeous ball for Casemiro to score what would have been the opening goal had the Brazilian not been offside, and then went even better with the cross for Nacho's goal when the ball came back to him after a corner. What a season he is having.

MF Luka Modric, 7 -- Not at his imperial best, but Modric illuminates even his weaker games with touches of unrivalled class. Few players can match the air of authority he brings to midfield.

MF Isco, 7 -- Started on the left-hand-side and had a quiet first half. When things looked like clicking, it was when he combined with Benzema. In the second half he seemed to have more freedom and that coincided with the team improving considerably. Looked surprised to be the first player to be substituted.

FW Rodrygo, 7 -- The victim of one or two tough Valladolid challenges, especially a first-half tackle from Joaquin Fernandez that infuriated the Brazilian's teammates. A second-half shot was well-saved by Jordi Masip, and a delivered a left-footed cross for Benzema who headed wide.

FW Karim Benzema, 7 -- Has not scored since Dec. 15th and had few opportunities to add to his tally tonight. No one would question his importance to the Real Madrid attack but this dry spell is one the team can ill afford.

FW Lucas Vazquez, 6 -- Replaced Isco with 20 minutes to go and made little impact.