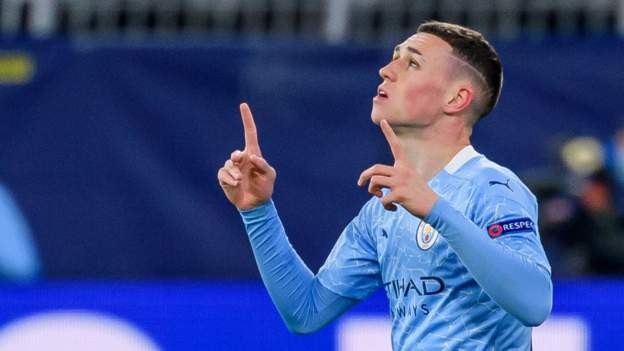 Foden, second left, is only the second player younger than 21 years old to score in both legs of a Champions League quarter-final tie (or later), after Kylian Mbappe in 2016-17 for Monaco, also against Borussia Dortmund, who was 18

Kylian Mbappe are you ready?

The dust had barely settled on Wednesday's quarter-final victory over Borussia Dortmund before Phil Foden was taking to social media to call out one of the Paris St-Germain men standing in the way of Manchester City and a first Champions League final appearance.

You can maybe forgive Foden for such displays of confidence. He is in the form of his life, scoring both home and away against Dortmund to help his side into the last four.

And his team-mates, manager and fans appear to share the England midfielder's self-belief.

Ilkay Gundogan said that City had "proved they are ready to fight for the semi-finals", manager Pep Guardiola spoke of them "building history" and City fan and former Oasis frontman Liam Gallagher simply tweeted one of his ex-band's lyrics: "I said maybeeeeeeeeeeeeee".

View more on twitter'It is not history, but we start to build it'

"I am incredibly happy for this club, for this chairman and for the fans, everyone," Guardiola told BT Sport after seeing his side seal progress to only the second Champions League semi-final in their history.

It is the first they will play in under the Spaniard, with the previous occasion seeing them lose to Monaco in Manuel Pellegrini's final season in charge in 2015-16.

"It is the second time in the semi-finals so it is not history in the club, but we start to build it," continued Guardiola, whose side flirted with elimination on away goals courtesy of Jude Bellingham's opener on Wednesday, before sealing the tie through a Riyad Mahrez penalty and Foden's finish.

"We were brilliant except the first 10 minutes where they were good.

"I'm incredibly happy to be in the semi-finals, to be one of the best four teams in Europe, to be against big, strong teams and we will try to be good."

Midfielder Gundogan continued on the theme, saying: "It means a lot to be honest, this club and this team deserve it. We are grateful for being in a great competition and reaching the semi-finals for the first time with this team.

"Today once again we showed character, we didn't play well at all in the first 15 minutes, we struggled and we weren't brave enough and were scared to lose something.

"We know how tough this competition is. In every single game the opponents are so difficult, everyone has quality and this Dortmund team has quality and can beat anyone.

"It was about staying in the game, playing with attitude and personality especially at this stage of the competition. We proved we were ready to fight for the semi-finals."

"But if you have the right attitude, with quality in the squad and with the right ideas, then the chances of success are high."

'He found me, he ran [past] everyone and found me'Guardiola (centre) has reached his eighth Champions League semi-final, now the joint-most in the history of the competition among all managers, alongside Jose Mourinho

A mini battle was fought within Wednesday's war, between two of England's most promising young midfielders.

For part of the evening, it looked as though 17-year-old Bellingham would come out on top, courtesy of a stellar display that belied his years and experience, capped by a superb opening goal.

Ultimately, though, it was Foden who emerged triumphant, steering City to victory with his fierce drive in off the post.

To celebrate he charged towards his manager on the touchline, with the pair embracing and soon enveloped by the rest of the side.

"He found me, he ran [past] everyone and found me," said Guardiola. "That's for all the club, all the people that work so hard, to achieve what we have achieved so far.

"We don't talk about winning all four. Now we take one game at a time."

Speaking as part of his punditry duty on BBC Radio 5 Live, former Coventry and Aston Villa striker Dion Dublin was full of praise for Foden and the way he has been guided by Guardiola.

"Whatever he (Guardiola) has done, it is working," he said. "Pep has drip fed Foden's talent into the first team. He is changing, becoming more accustomed to the physicality and decision making in the game.

"He's taken on so much from both Silvas (David and Bernardo) he has played with at City. That left hand side he plays on is his - he is so comfortable."

Ben Deighton: There shouldn't be a conversation around Foden and England. He's one of the first names on the team sheet. If you think otherwise you're clueless.

Rich: What price Foden and Bellingham if Haaland is a £100m footballer. Did Haaland actually contribute anything in 180 minutes?

Aqeel Sookoo: Pretty sure City can take PSG apart but really hope that it's not going to be easy and comfortable.

Nick: Man City are the clear favourites for the Champions League now. Will easily beat any of the others.

Paul Leonard: That's what fans mean, someone stepping up and boy Foden you did, taking the game by the scruff of the neck and not leaving it to De Bruyne most of the time.

Ray Smart: If Haaland is worth £150m, how much is Phil Foden worth? Has to be double that surely!