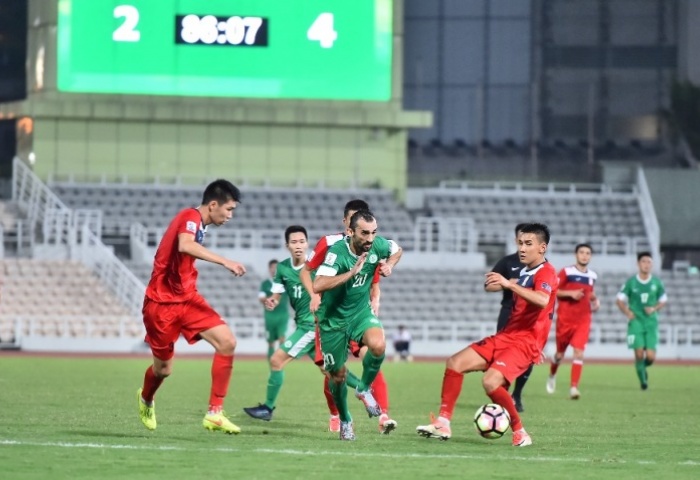 Macau: The Kyrgyz Republic survived a second half fightback from Macau to remain on course for the AFC Asian Cup 2019 after posting an entertaining 4-3 win on Tuesday in Group A.

Two goals from Anton Zemlianukhin either side of a further strike from Vitalij Lux saw the visitors leading 3-0 after 52 minutes at Macau Olympic Stadium only for Chan Pak-chun and Nicholas Tarrao to hit back for the home side to set up a potentially tense final 10 minutes.

But with substitute Mirlan Marzaev adding a fourth for the Kyrgyz Republic with six minutes remaining, the visitors claimed a third win in five games despite Carlos Fernandes’ late strike from Macau.

The visitors opened the scoring from the penalty spot after 24 minutes, with Zemlianukhin converting following a handball inside the area.

And the visitors doubled their lead nine minutes before half-time as Lux comfortably converted from close range.

Zemlianukhin added a third seven minutes into the second half with a cool finish from Akhmedov Murolimzhom’s cross, with Macau struggling to cope

But the home side found a way back into the contest with 18 minutes remaining through Chan’s free-kick.

And they further reduced the deficit eight minutes later as Tarrao’s penalty made it 3-2 with 10 minutes remaining.

But the visitors crucially restored a two-goal lead through substitute Marzaev four minutes later before Fernandes found the net for Macau with three minutes remaining.