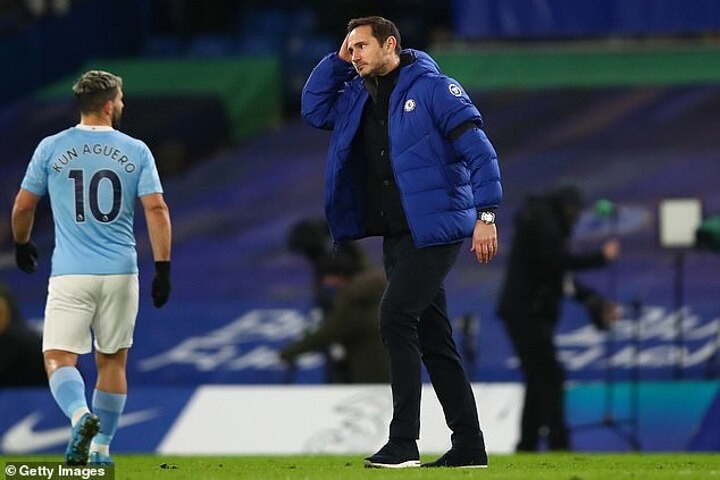 Frank Lampard has insisted that the coronavirus pandemic has enabled him to maintain a proper perspective on the difficulties of life at Chelsea, where he remains under pressure as his side takes on Luton in the FA Cup fourth round.

With three wins in ten, Lampard's future as manager is in doubt but the club legend and top goal-scorer insists that current affairs in the wider world have allowed him to focus on the privilege has he has of being Chelsea manager rather than worry about external pressure.

'I'm the manager of Chelsea and a Chelsea fan and who wouldn't get excited about that prospect?,' said Lampard. 'So I'm doing that in these tough times and can come to work and put on this tracksuit and feel proud to wear it.

'While a lot of people are suffering up and down the country, around the world, people have been dying, daily the numbers go up, and when I see that and feel that we all hopefully have compassion to look round clearly and see that people are losing their jobs, people are struggling with their livelihoods then that's massive perspective to the so-called pressures or struggles. And I genuinely mean that.

'The most I interact with the media to get a sense of where it's at [the pressure] is when I speak to the media so that's kind of the most I get that sense. I'm not stupid — sometimes I don't read it on purpose — but at the same time the pressure in this job for me is me, I put pressure on myself. I want to be a success.

'So when we go through a run of games and we don't win, I look for the solutions and the answers and I'll fight for them, and then I expect that from the players on the pitch. That's not the worst pressure, that's a good pressure, I enjoy doing that with my life.

'That's just where I'm at. But the perspective of what is going on in the world is a huge one. Once everyone wants to stop talking about the pressure I'm under, maybe I'm just fortunate to be doing a job I love.'

And Lampard has warned his players to follow the example of Leicester City's James Maddison or risk being dropped. Maddison revealed this week after the 2-0 win over Chelsea that Brendan Rodgers' mantra was 'if you don't run, you don't play.

Lampard said: 'When I listened to Maddison speaking after the Leicester game and he spoke about Brendan Rodgers, a coach I have a lot of admiration for, the message was 'if you don't run you don't play'. If I want to start my identity, that's how I start it.

'From the minute I came into this club last year and started pre-season, with the Dublin trip and the Japan trip, it was 'can we run and be really good and effective off the ball and on the ball. Can we have energy in the team?' I think that's the first thing I want to see and it's something we've definitely dropped off on, there's no doubt about that.

'We've seen it this year when we have had full backs get into the team who really can do the defensive job but also get forward and help us be a threat in wide areas, when we can get our wingers inside and get real pace and energy throughout the team.