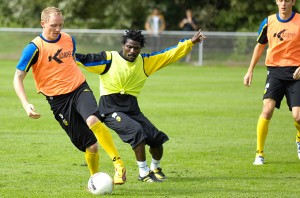 Dutch side Vitesse Arnhem have confirmed that they have signed Ghana midfielder Laryea Kingston.

The midfielder joined the club on a free transfer but the terms of the contract were not disclosed.

The Eredivisie league campaigners have given the gifted the player the chance to revive his career in Europe.

Kingston has been searching for a new club since parting ways with Scottish side Hearts in May.

He started training with the first team of Vitesse on Wednesday and coach Ted van Leeuwen hailed the qualities of the Ghanaian.

Leeuwen said: "In Kingston we have a player who is very experienced at the high level of world football.

"He is a utility player meaning he can be played in many positions. He can play in midfield, striker or or just behind the striker. "

Vitesse want to fortify their midfield to move out of relegation zone in the four-week-old Eredivisie.

The 30-year-old is conifedent he can recapture his form as he has not been in action since May, insisting he will Vitesse's league campaign.

â€œI have not played competitively for three months and itâ€™s nice that I can train again. The training was tough and that is what like,â€ Kingston told the club's official website.

Kingston is confident that his good showing in the Dutch top flight will earn him a recall to the Ghana national team.