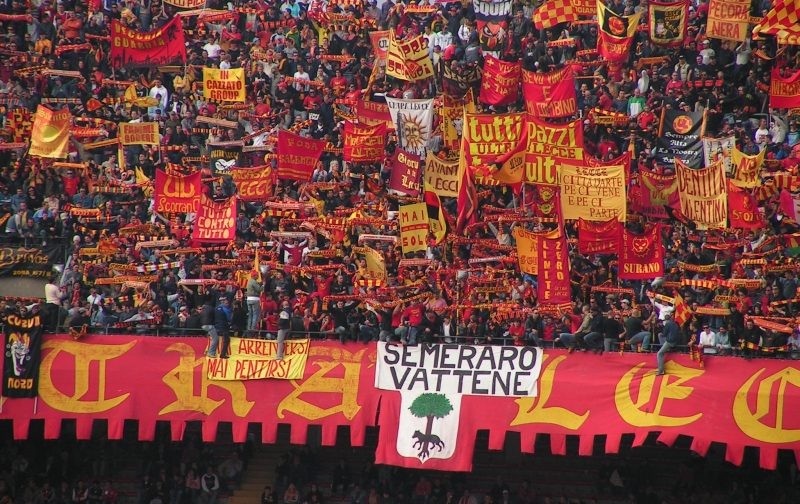 When the Serie A fixtures were announced, it was unlikely that a visit to the Giuseppe Meazza Stadium was top of Lecce’s list to start the campaign, and the Giallorossi found themselves decimated by a lively Inter side in a 4-0 that was every bit as convincing as the scoreline suggests.

There will be more difficult days to come, not least if the writers of Forza Italian Football are to be believed – only one predicted that Fabio Liverani’s side will avoid relegation straight back to whence they came.

However, Lecce should be celebrated while they are here, and that they are here, a first representative of Puglia in Serie A since they themselves were demoted seven years ago. In that, they are one of only three sides, none of whom  have won any silverware, but all of whom have made their mark. If the Lupi can put some noses out of joint this time around, they might surprise some of their more illustrious opponents. They have done it before.

This is Lecce’s 16th Serie A campaign, a figure that finally lifts them above half of rival Bari’s total, though the Galletti show no sign of returning amidst financial strife and begin this season alongside fellow Pugliese sides Bisceglie, Virtus Francavilla and Monopoli in Serie C. It is a long way back, as Lecce know all too well. Bari have enjoyed some spectacular seasons in their time, and seen more than a few wonderful players.

The Stadio San Nicola has seen the likes of Antonio Cassano, Leonardo Bonucci and Gianluca Zambrotta grace the turf over the years, but all moved on before too long, as did Antonio Conte, the Lecce-born coach who masterminded the Biancorossi’s promotion in 2009.

The 1995/96 Capocannoniere Igor Protti was the only such title winner to suffer relegation, illustrating a point that has remained constant throughout all Pugliese sides’ spells in the top tier. Any players good enough to thrive will be picked off by the big clubs, and usually quickly. One might think Conte has a claim on being the most celebrated tactician within the region, but that would be to ignore the impact on the game that was made by the other side from Puglia who have reached Serie A – Foggia. While the Satanelli first earned promotion from Serie B, under the guidance of appropriately named coach Oronzo Pugliese, back in 1964, they are far more well-known for the chain-smoking Czech who guided them back to the top table in the 1990s.

Zdenek Zeman divides Italian football support like few other coaches, but without question his Foggia side that reached the top half of Serie A were one of the more outrageous stories that calcio has to tell. The trident of Francesco Baiano, Giuseppe Signori and Roberto Rambaudi combined to such an effect that in 1991/92, only champions Milan scored more goals than Foggia’s 58. The downfall of Zeman’s plan was equally highlighted, as only bottom of the table Ascoli conceded more than their 58 at the other end.

Such statistics, and such football, make for great reading and great viewing, but Zeman’s turnover of players, and the demand they find themselves in after success means that his clubs seldom overachieve for long. That was as true at Foggia as it has been at many other clubs he has visited since, and the Rossoneri now languish in Serie D. Which means that Lecce are the only representatives Puglia is likely to have in Serie A for some time, and will have to try to emulate their better performances than some of the more feeble ones that have seen them relegated eight times from Serie A.

Too often the Giallorossi have seen big name players come and go, either having progressed through the club’s youth ranks, as with Conte and Graziano Pelle, or using the club as a stepping stone to earn a bigger move in Italy. South Americans have been a great exponent here, with Luis Muriel first coming to prominence at the Stadio Via Del Mar, as well as Javier Chevanton, Juan Cuadrado and Guillermo Giacomazzi.

Even the likes of Mirko Vucinic and Nenad Tomovic have enjoyed spells with the Lupi. Vucinic was part of a Lecce side that was coached by Zeman, and was the first ever team to avoid relegation from Serie A despite having the worst defence in the division. They conceded 73 goals, whilst scoring 66, second only to Juventus, as Valeriy Bojinov and co swept to 10th position. Of course, Pelle, Bojinov and soon enough Cristian Ledesma, all moved on and Lecce fell back down to Serie B. It was a familiar tale, and is not unlikely to be repeated even if Fabio Liverani is able to do the unthinkable and keep his side afloat.

It might be remote, it might not see the best football in the division, and it might not always be full, but the Stadio Via Del Mar will be the only place where one has been able to see Serie A football in Puglia for seven years, and Lecce supporters will be sure to make the most of it, hoping that they would not have to wait quite so long for the opportunity to come round again; a hope undoubtedly shared by both Bari and Foggia.

Puglia is back in Serie A, and the league is the better for it.