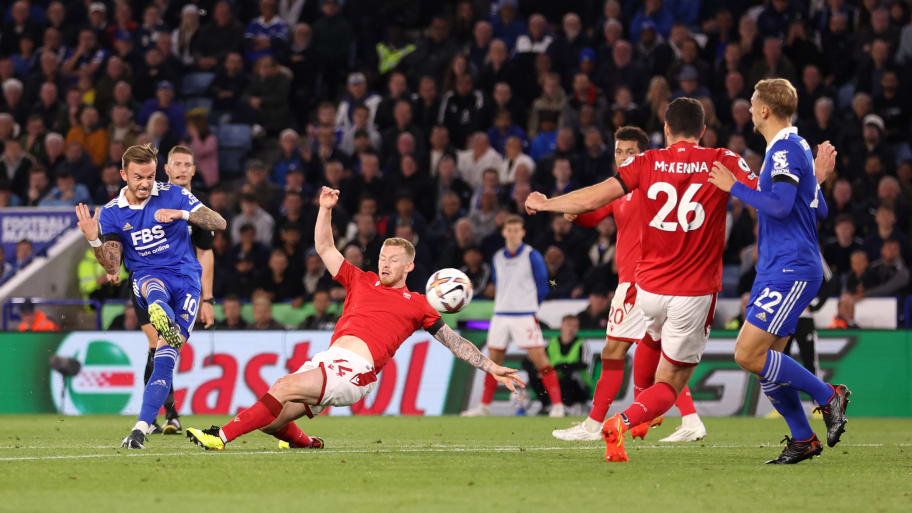 A first-half blitz inspired by James Maddison helped Leicester beat Nottingham Forest to earn their first Premier League win of the season and ease the pressure on manager Brendan Rodgers.

The Foxes and Forest were both badly out of form going into Monday night's game but it was the hosts who took firm control in the first half as Maddison and Harvey Barnes both struck from range in the space of three minutes.

Maddison then produced a trademark free kick to send Leicester 3-0 up before the break, with Steve Cooper's visitors fluffing their best chance when Taiwo Awoniyi hit the post with the game still goalless.

Substitute Patson Daka added some gloss to the scoreline in the second half with a cute back-heel from Maddison's cross.

Leicester and Maddison's first goal came about courtesy of a chunky deflection off Scott McKenna, leaving Dean Henderson with no chance between the Forest sticks.

Barnes' effort had no element of good fortune to it, however.

Jamie Vardy - guilty of wasting a few good goalscoring chances - turned provider, latching onto Maddison's raking pass to set up Barnes who cut inside and curled a beauty into the far corner.

Forest's misery was compounded before half time as Maddison made Cheikhou Kouyate regret bringing down Kiernan Dewsbury-Hall on the edge of the area.

The 24-year-old left Henderson rooted to the spot, striking over the wall and seeing the ball clip off the post and in for 3-0.

Forest boss Cooper was visibly stressed on the touchline, though his continued faith in the same starting XI was somewhat surprising as they struggled to create clear-cut opportunities.

A triple change at half time did at least stop the rot for the first 25 minutes of the second half, though Wout Faes, Barnes and Maddison all came close to adding to the home side's advantage.

That second-half resistance was eventually broken when Daka grabbed a goal from the bench. The substitute striker flicked Maddison's zipped cross first time beyond Henderson.

The victory relieves the pressure somewhat on Rodgers, though the three points and goal difference swing has only seen them replace Forest in 19th.