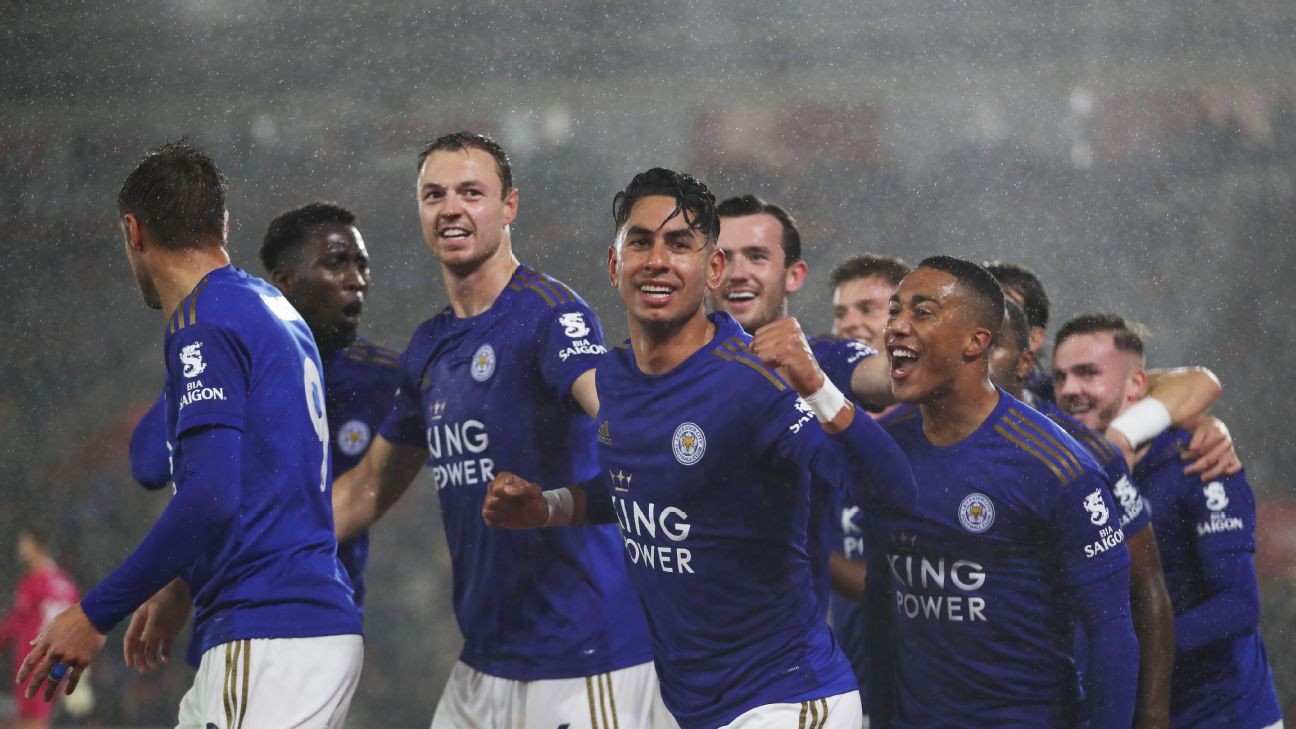 Leicester are third in the Premier League on goal difference and look like the best team in England not named Man City or Liverpool.

During the miracle 2015-16 season, when Leicester defied all logic and 5000-1 odds to be crowned Premier League champions, their fairy tale contained an asterisk. The achievement, one that resonated around the world for its "anything is possible" theme, was undoubtedly special. However, it was also coloured by the capitulation of the big clubs: Leicester were very good, but the traditional powers were staggeringly poor.

Arsenal, nearing the end of Arsene Wenger's reign, ended 10 points behind them in second as Tottenham lost their last two games by a 7-2 margin to stumble into third. Manchester City were prepping for the introduction of Pep Guardiola to replace Manuel Pellegrini and with the club announcing that move four months before the end of the campaign, the distracted team crawled to the finish line.

Manchester United, dull and desperately counting down the final days of Louis van Gaal's tenure, lost out on a Champions League place on goal difference to their neighbours. Jurgen Klopp was navigating his way around English football with Liverpool, placing eighth while reaching the Europa League final, and Chelsea had sacked Jose Mourinho in December when the club were a lowly 16th.

With them all of them locked in battle against mediocrity, Leicester counter-attacked their way to one of sport's greatest shocks. Now, however, up against the most relentless Liverpool and Man City sides, the East Midlands club are holding their own in a different sense. They're a much better unit than their title-winning vintage: they boast a more balanced squad, some of the most exciting and consistent young players in the league, an ability to play different systems and an all-encompassing strategy to maximise their potential.

It is no miracle or accident that they're third in the standings under Brendan Rodgers, with the joint-best defensive record -- despite selling Harry Maguire to Man United for £80 million -- and the second most goals scored behind City. Leicester are also more accomplished in every metric at this stage of the season than they were in 2015-16. (Then: Played 11, scored 23, conceded 19, goal difference 4, points 22. Now: Played 11, scored 27, conceded 8, goal difference 19, points 23.

On Saturday, Leicester host faltering Arsenal -- Unai Emery's side are without a league win in their last three -- in a fixture that can underscore their status as the definite best of the rest behind Liverpool and Man City.

By October 2018, it was evident that Claude Puel and Leicester were approaching the end of their time together. The former Monaco, Southampton and Lille manager had lost the dressing room, frozen out director of football Jon Rudkin and failed to communicate properly with staff or players. Throughout the season, Puel always seemed on the brink and the volatility of his tenure could be seen on the pitch. Something needed to give.

Leicester's top candidate was Rodgers, who was busy navigating an all-conquering Celtic towards a third straight domestic treble. They'd inquired as to his interest earlier in the season, but he'd wanted to finish the campaign in Scotland. By February, however, there could be no more waiting: Puel's position became untenable and he was sacked after seven defeats in nine games.

Leicester went all in on Rodgers, paying £7.5 million in compensation to release him from his contract at Celtic. They needed a progressive manager who had experience in the Premier League, a track record of developing young players, an aggressive, appealing style of football and a burning desire to compete with the traditional powerhouses. Rodgers ticked all the boxes though many pundits questioned the wisdom of leaving the Scottish giants midseason to take charge of a middling English side, potentially ignoring the bigger picture.

Leicester had all the tools to succeed but needed the right leader. Rodgers was that man -- his spell at Liverpool judged largely unfairly -- at the right time in his career and with the right base to build from.

Rodgers joined Leicester back in February 2019 and has added intensity and purpose to their talented squad.

"This was an opportunity that arose very quickly and I had a decision I had to make very quickly," he explained after his appointment. "Removing the emotion from that was key. The opportunity to come to a club like Leicester wasn't going to wait for me. I certainly haven't swapped success for mediocrity. This is a club with a rich history of its own and its recent history has been successful like we've all seen. It was difficult but it's one I made from a career perspective."

So far, he has thrived in the responsibility of meeting and exceeding the club's exceptions.

"The change, in terms of everything from the mood around the place, how the players responded to messaging and the standards on the pitch and off it, has been massive," one staffer said.

"Someone mentioned it's like we were stumbling around in the dark and now the lights are on and everything is clear."

Chairman Aiyawatt Srivaddhanaprabha, known around the club as "Top," is determined to follow through on his late father Vichai's great hopes for the club following his tragic death in a helicopter crash outside the King Power Stadium last October.

"We want to improve all aspects of the club to make the club sustainable and successful for many generations to come," Aiyawatt said at the end of last season. "We will always make support available to areas of the club that needs strengthening, whether that's the playing squad, the training ground, the stadium, staffing and infrastructure. If a requirement for the squad is recognised and suitable talent identified, we're always ready to support progress and improvement."

Leicester's recruitment has been exceptional and ahead of the curve. A case in point is central defender Caglar Soyuncu -- one of the season's standout performers thus far -- who was brought in for just under £18m in the summer of 2018 in the knowledge that Man City, Man United and others would be circling around Maguire in the 2019 summer window. They therefore had a ready-made replacement who was settled in, sidestepping the need to pay over the odds for a defender given the record fee they gained for the England international.

- O'Hanlon: The moves that make Liverpool, Man City stand out
- Ogden: Get ready for the biggest game of the season
- ESPN Fantasy: Set your lineup!

Head of senior recruitment, Lee Congerton, has a close relationship with Rodgers that stretches back to 2005 when the pair were at Chelsea. The Leicester boss was then reserve team manager at Stamford Bridge, while Congerton was a youth team coach before Jose Mourinho promoted him to chief scout. They were reunited at Celtic following their three-year stint at Chelsea, with Rodgers making the former Welsh player recruitment director at Parkhead in 2016. It was no surprise that Congerton joined Leicester too, overseeing Callum Smithson and Jose Fontes in the technical scouting team while working with director of football Rudkin and chief executive Susan Whelan.

In a nod to their already impressive squad and stellar academy, Leicester did minimal business in the summer. Making the Youri Tielemans deal permanent as a club record signing for £40m when Man United were scouting him was a coup and securing Ayoze Perez from Newcastle United was another smart move.

Jamie Vardy, left, in action against Crystal Palace. A tweak to his all-action role up front has helped the 32-year-old lead the Premier League in scoring this season.">

Equally, they've done well to keep their highly coveted assets. Left-back Ben Chilwell, 22, was pursued by Arsenal and Liverpool before committing his long-term future to the King Power Stadium, with Man City still keeping tabs on his development. Wilfred Ndidi has been considered by several elite teams during their search for defensive midfielders, while James Maddison continues to be heavily linked to Old Trafford. Both players are also 22 and are viewed as among the league's best talents in the centre of the park.

Jamie Vardy, now 32 but still leading the league's scoring chart, famously shunned Arsenal after being named FWA Footballer of the Year. Since joining the club, Rodgers has managed to extract the optimum out of the striker with small tweaks to his game.

"Firstly, from a defensive perspective he is not having to press the whole back four," the manager explained. "He is a guy who will run all day for you. Now it is a lot more synchronised in how we want him to press and he is doing short bursts of pressing, which he is very good at. He is so clever at setting traps to press so he is a real focal point in that aspect. Then he is playing more on the corridor and central. The other guys, it is their job to create opportunities for him and others, and then actually asking him to stay on the last line.

"He is playing with a smile and really enjoying his football and that is always important as a player," said Rodgers. Vardy has scored eight goals in his eight league starts against Arsenal, which includes three braces and you wouldn't bet against him embarrassing their defenders again on Saturday.

While Unai Emery's future is in doubt and his club's decision-making is constantly called into question -- from the handling of Mesut Ozil, the Granit Xhaka captaincy mess to further strengthening an explosive attack in the summer instead of fixing a self-detonating defence -- Leicester's start to the season has been a reflection of their smart choices. From the construction of an £80m new training complex, the assembling of an exhilarating squad with a high ceiling, the appointment of Rodgers, to the vital decision not to travel far in preseason (687 miles compared to Arsenal's 11,654) in order to properly implement Rodgers' blueprint, the 2015-16 champions are benefiting from solid planning.

Their opponents from north London this weekend would do well to take notes.