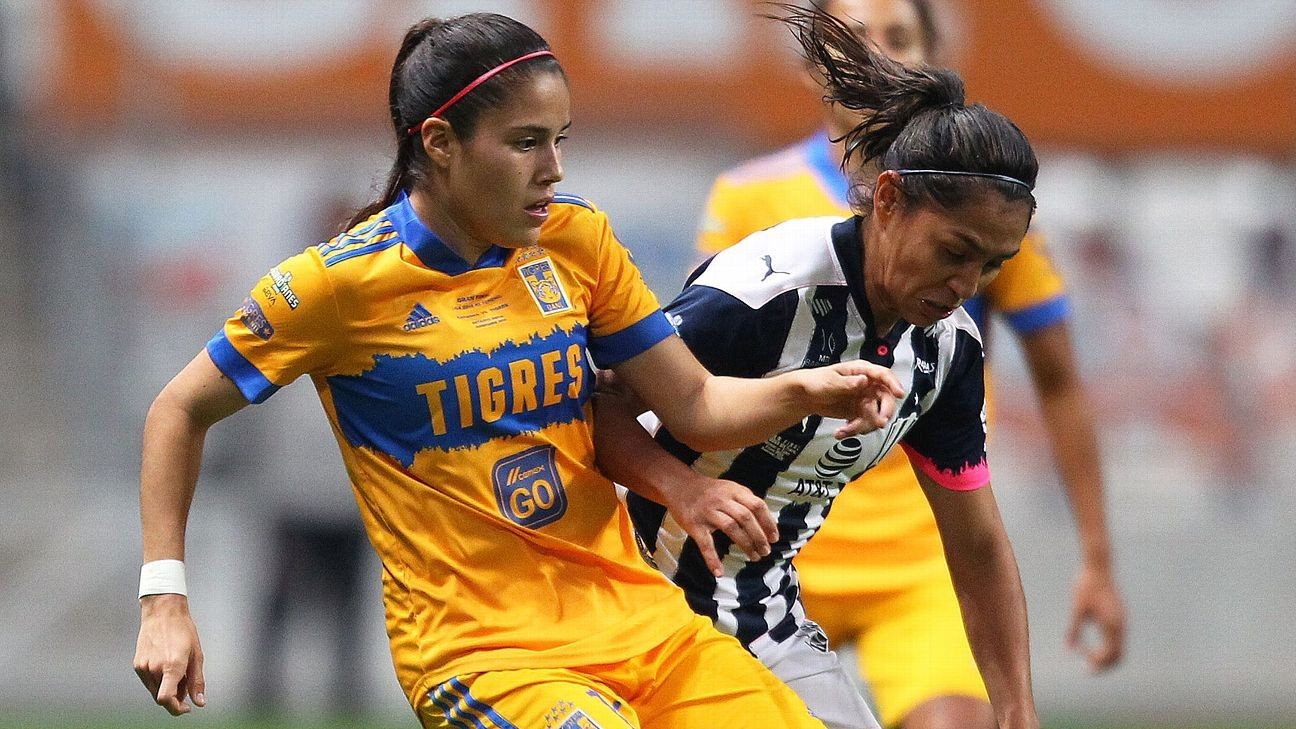 Since the debut of Liga MX Femenil in 2017, Mexico's top flight of women's soccer has easily been dominated by two teams: Monterrey and Tigres.

Including this season, the crosstown rivals have both appeared in five of the last eight Liga MX Femenil finals. With league members having affiliations with the men's Liga MX, it isn't much of a surprise to see heavy investing organizations like Monterrey and Tigres thrive and take the spotlight within the women's game as well.

Parity in Liga MX Femenil could and should be within reach in the near future with more teams building high potential projects, but as of now, those in the upper echelon are undoubtedly the two current finalists. With that in mind, Friday's first leg (Dec. 17 at 10 p.m. ET) and Monday's second leg (Dec. 20 at 9 p.m. ET) of the championship series will be must-watch TV.

For those who are curious about Liga MX Femenil, here are three reasons why you should watch the upcoming matches from one of the most exciting but still growing leagues in soccer.

If you're not clued in just yet, both Monterrey and Tigres have incredibly passionate fanbases. Other Liga MX Femenil teams bring in big crowds of their own, but none do it as consistently or at the same level as this season's two finalists.

Although Atletico Madrid broke the record by 2019, Rayadas supporters set a previous world record in May of 2018 for the most fans in attendance at a women's club soccer match. With a total of 51,211 at the Estadio BBVA Bancomer, Monterrey narrowly lost to Tigres in the second leg of the 2018 Clausura final.

There should be near-sellout expected at Monterrey's vaunted venue, and Tigres took just a few hours on Wednesday to sell out their tickets for the second leg at the venerable Estadio Universitario.

It doesn't take much work to find eye-catching moments from either team. In fact, all we have to do is dive into the previous round in the semifinals of the Apertura playoffs.

Down 2-1 on aggregate against Club America after the first leg of the semis, this golazo from Liliana Mercado on Monday was just the first of four goals that Tigres scored in their mesmerizing 4-0 comeback in the second leg.

Mounting a comeback of their own, Monterrey were caught chasing a 1-0 deficit from their first leg. At home in the second leg, their 2-1 win was kick-started by a world-class run from 18-year-old Aylin Avilez, who set up a perfect assist for San Diego's Christina Burkenroad to score.

With an eventual 2-2 aggregate scoreline, Monterrey were able to pass through into the final with a higher seeding tiebreaker.

Looking back at these moments and countless others from the Liga MX Femenil season, there are clear signs of progress for Mexican women's soccer. After all, 10 of the players who will take part in the final were also involved in the Mexican national team squad that went undefeated over two games against Canada last month.

Players like these, and several others from both clubs who have previous national team experience, pushed Monterrey to No. 2 and Tigres to No. 1 in the regular season table of the Apertura.

There's no lack of U.S.-born representation from this final. Initially only allowing Mexican-born players to take part in the league, Liga MX Femenil eventually opened the doors to Mexican-Americans by the summer of 2019.

Since then you've had game-changers like Sanchez and Sierra for Tigres, who have become household names. Sanchez, who was born in Idaho, spent time in the National Women's Soccer League with Chicago Red Stars and was on a recent loan with the Houston Dash. Sierra is from California's Bay Area and played in the NWSL and Europe before a move to Tigres with her partner and teammate Stephany Mayor -- who are believed to be the first openly gay Mexican athletes.

Monterrey have a couple of U.S-born players as well, including Monica Flores and Burkenroad. New Jersey's Flores has been a vital figure in Monterrey's defense and will likely start at LB in the final against Tigres. As for Burkenroad, the San Diegan forward had found some momentum with a goal and assist in Monterrey's latest 2-1 win over Atlas in the semis.