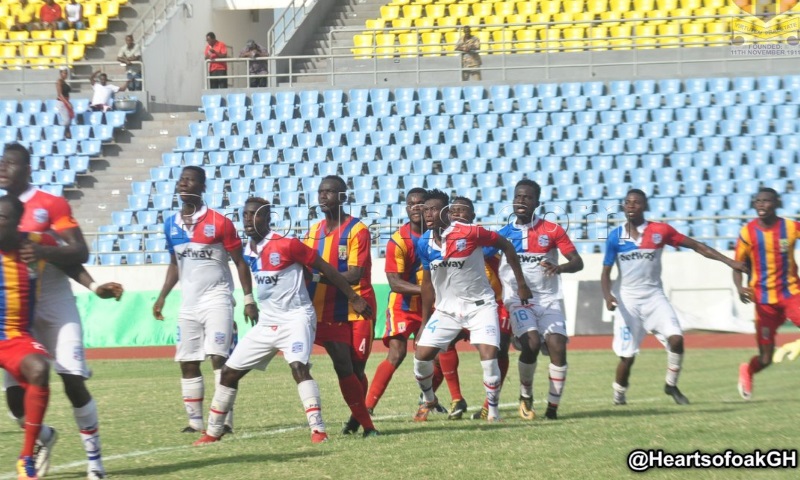 GHANAsoccernet.com brings to you Live updates of match day five games of the 2019/20 Ghana Premier League across the various league centers.

After grabbing their first win of the campaign in Cape Coast against Ebusua Dwarfs, Liberty Professionals will look to build on their impressive run this season after four games without defeat.

Coach David Ocloo has stated the win in Cape Coast is a morale booster for the game against Hearts of Oak.

Meanwhile, the Phobians, after two defeats from their opening two games have managed to secure four points from their last two games. A win against Dwarfs and a draw at WAFA.

Hearts have made some good signings just before transfer deadline, with the arrival of midfield duo Emmanuel Nettey and Abdul Aziz Nurudeen.

Former Bechem United Star Abednego Tetteh could make his debut against Liberty, if he is cleared.

Liberty Professionals Elvis Baffour and Abraham Wayo could be trouble for the Phobians if they are to stop the Dansoman based sides tricky attack.

Games between the two sides has always been a tough one especially at the Carl Reindorf Park.

Asante Kotoko will start serving their stadium ban against struggling side Ebusua Dwarfs on Sunday at the Baba Yara Stadium.

The club have been banned and will play five home matches behind closed doors due to the shooting incident which left one fan badly injured last weekend after their defeat against Berekum Chelsea.

Maxwell Konadu looks to be under early pressure and his side have failed to match his feats during his previous spell at the club.

In the 2011/12 season, Kotoko only lost three games under Maxwell Konadu. His team has already lost two games after matchday 4 this season as the Kumasi based side now sit 9th on the table.

The Porcupine Warriors desperately need a boost and the upcoming clash against Dwarfs may provide it.

This season has been a real nightmare for Ebusua Dwarfs. On Wednesday, they fell to a 2-1 defeat at home to Liberty Professionals which meant four consecutive losses so far this season.

After the game, head coach Assibu resigned from his post at the club. On Thursday, the Mysterious Dwarfs appointed Ernest Thompson Quartey to fill the vacant role.

Ernest now has to find ways to boost the confidence of his men and hope for a huge response against league giants Asante Kotoko.

In their last five meetings, Asante Kotoko have won three and lost one (W3 D1 L1). The hosts will go into this game with some hope of getting a result.

Karela United will be looking to bounce back from their match four defeat to Great Olympics at the Accra Sports Stadium in this fixture against King Faisal on Sunday.

The Ayinese-outfit lost the game by 2-0 and have set their eyes on a win against King Faisal.

Karela United dropped points at home against WAFA on match day one at the Akoon Park and will have to guard against complacency against King Faisal.

King Faisal are still searching for their first win of the season and will aim at upsetting Karela United at home.

King Faisal drew against Bechem United 2-2 on match day four to pick their first point of the season after suffering three defeats in the opening fixtures.

The draw against Bechem could inspire them on to beat Karela United who haven’t been impressive this season.

Game underway at the various centers