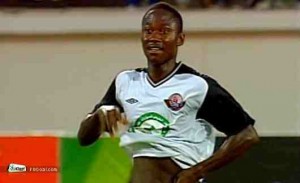 The former Asante Kotoko striker will be playing his first match in two years since recovering from a leg injury.

His side Petrojet host Smouha FC who also have veteran Godwin Attram and Samuel Affum in their fold.

Click on the link: http://www.ghanasoccernet.com/watch-live-matches/ and select the match.

Elsewhere, teenage striker Richmond Boakye-Yiadom could increase his goal tally for Sassuolo who travel to Reggina in the Italian Serie B.

Kick-off is at 14:00 GMT and to can watch the match live by clicking on the WATCH LIVE tab on our homepage.

Isaac Vorsah is ready for action when TSG Hoffenheim entertain Hertha Berlin at home in the Bundesliga. The match starts at 14:30 GMT.

Bernard Yao Kumordzi could be playing one of his last games for Panionios who travel to Xanthi at 17:45 GMT.

Ghanaian striker Kwame Quansah will be searching for goals for Heracles who host Anthony Annan's Vitesse Arnhem in the Dutch Eredivisie.

The Ayew brothers Jordan and Andre will feature for Marseille in their French Ligue 1 clash against Lorient at 18: 00 GMT.

Kevin-Prince Boateng will be in the AC Milan starting line-up against Siena in the Italian Serie A at 19:45 GMT.

New sensation Amidu Salifu is set for a cameo role for Fiorentina who host Atalanta.