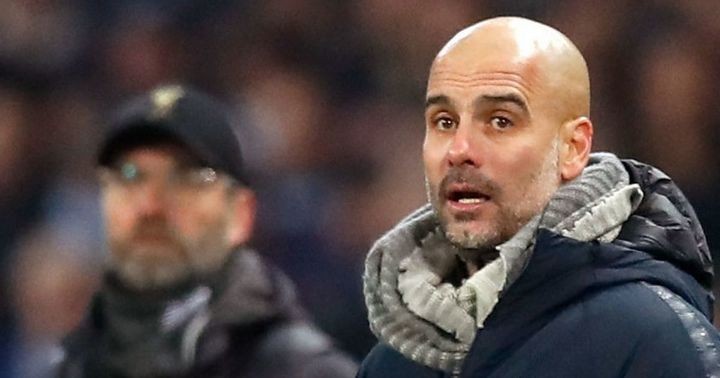 Liverpool have plenty to thank Manchester City for.

Pep Guardiola's team raised the bar to perhaps the highest level the Premier League had ever seen.

This City side can exert an unprecedented level of control over football matches.

And they certainly know where the goal is.

Their approach has won them huge plaudits as well as back-to-back league titles.

But, crucially, City also provided Jurgen Klopp and his men with a target.

Liverpool had to be relentless and nigh on perfect to overhaul their rivals.

That is exactly the mentality Klopp managed to instil in his champions elect, who sit 25 points clear at the top of the suspended Premier League table.

Yet something has been amiss at City this season.

And this is where Liverpool can benefit again and learn a vital lesson from Guardiola's troubles.

Granted, the Reds have stormed the league.

Klopp's men cranked up the pressure from day one and went on a scarcely believable winning run.

Should Liverpool secure the title - as seems almost certain - their own stellar form will be the key factor.

But City's situation should also act as a warning.

After sealing league crowns with astonishing points hauls of 100 and 98 in successive seasons, recent months have been a slog for the Etihad outfit.

City have 57 points as things stand. Their maximum possible is 87.

Plenty of reasons have been proffered for why things have dropped off.

Injuries have struck in depleted areas. Especially in defence.

Liverpool have been formidable opponents and seemingly impossible to match.

But in addition, perhaps, two arduous campaigns competing on multiple fronts have taken their toll.

Last summer City did shell out to replenish the squad.

But realistically only £60m man Rodri has made his mark, slotting neatly into midfield.

Big money was spent on João Cancelo yet he has tended to be seen mostly in the cups so far.

Angeliño made a handful of appearances before being shipped out on loan to RB Leipzig in January.

And this is where the Reds may have to take heed.

Liverpool have gone at that same searing pace for two seasons now.

European Cup winners last year and 97 points domestically. On course to go even better this time around in the league and break the 100-point barrier.

While 2019/20 has seen City dip and Liverpool surge, could the Reds suffer a similar burnout next term?

The past couple of transfer windows have been modest ones at Anfield.

Recent recruit Takumi Minamino represents the highest profile signing - and the most expensive at £7.25m.

It does not necessarily mean a wild spending spree is now needed.

And given the potential financial impact of the ongoing coronavirus lockdown, that may be unrealistic. For any club.

But depth in the right areas, adding key rotation options and a general freshening up of the dressing room could help stave off the malaise suffered by City.

Liverpool are known to plan their scouting activity two transfer windows in advance.

Discussions will already be taking place and assessments made as the post-suspension football calendar becomes clear.

This supremely talented squad would undoubtedly back itself to go again in 2020/21.

But the Reds may need a few reinforcements to stay soaring for the third season in a row.