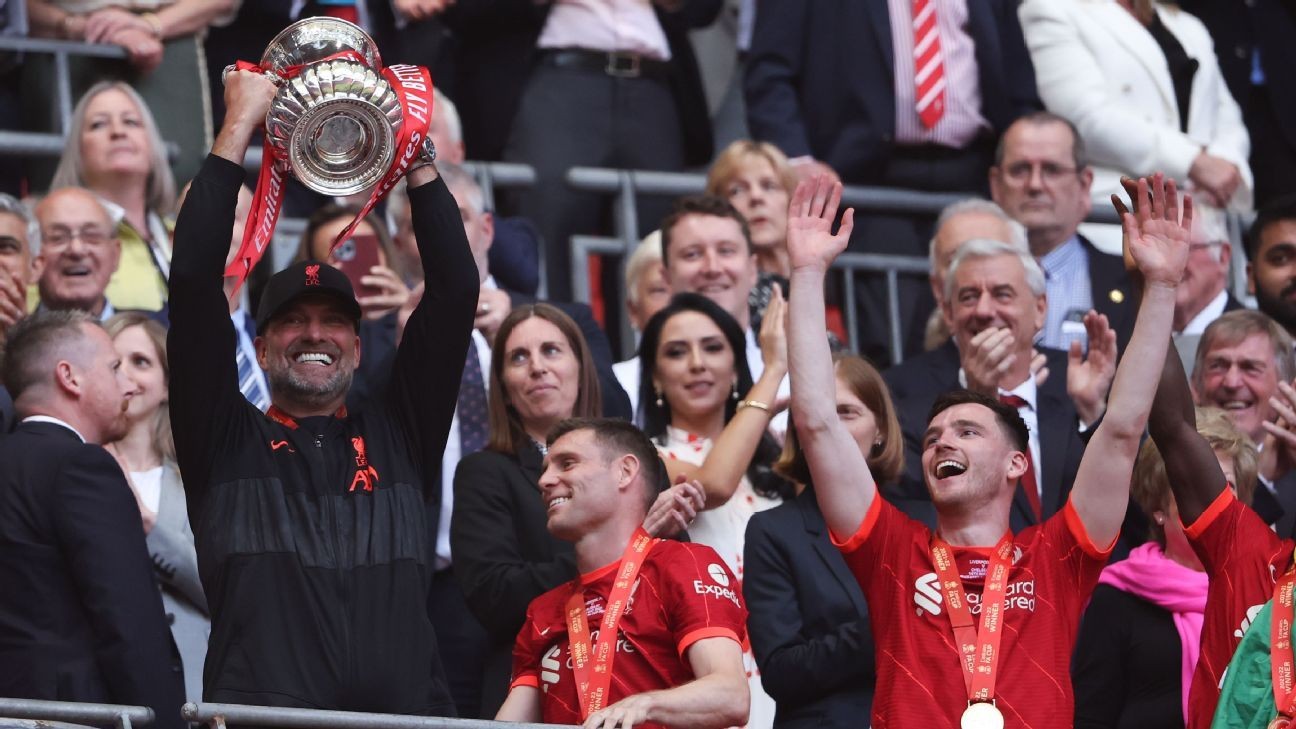 Klopp's team are exhausted and picking up injuries as a brilliant season reaches a critical finale. Can they find the strength to keep going? Matthew Ashton - AMA/Getty Images

LONDON -- Liverpool are leaving absolutely nothing out on the field in their pursuit of the Quadruple. It is now two down, two to go, after a second Cup Final penalty shoot-out win against Chelsea this season saw Jurgen Klopp's team add the FA Cup to the Carabao Cup they lifted at Wembley three months ago. But with Mohamed Salah limping off with a groin strain after just 33 minutes and Virgil van Dijk unable to play beyond the 90th minute, time will tell as to the full cost of this victory over Thomas Tuchel's side, which saw Chelsea earn the unenviable distinction of becoming the first team in FA Cup history to lose the final in three successive seasons.

"I couldn't be more proud of my boys, the shift they put in, how hard they fought, the early changes."

History tends not to remember the losers, and Chelsea's failure to win again will quickly be drowned out by a red tide of Liverpool plaudits. Even if they win nothing else this season, Liverpool have already achieved a domestic cup double, a feat they last pulled off in 2001 and that year, they also won a major European trophy by beating Spanish club Alaves to win the UEFA Cup.

The inside story of how Man City signed Haaland3dRob DawsonJack Harrison's unique path to Premier League: From Man United academy to U.S. high school and back4dBruce SchoenfeldChampions League revamp: How the competition will work from 2024-253dDale Johnson

Klopp's remarkable team are still on course to repeat that cup treble by beating Real Madrid in the Champions League final in Paris on May 28, but before then, they could lay the platform for an unprecedented quadruple by edging out Manchester City in the race for the Premier League title. That one remains the toughest, and most unlikely, target for Liverpool to achieve. City can move six points clear with two games left to play with a win at West Ham on Sunday, but no matter the result at the London Stadium, Klopp's players will have to go to the well again at Southampton on Tuesday, needing to win to keep alive their hopes of the title.

From the decisive penalty by Kostas Tsimikas, which settled Saturday's cup final 6-5 in Liverpool's favour, to kick-off at Southampton, Klopp's team have just 72 hours to recover from the physical and emotional toll of this draining Wembley win. And that is the biggest problem now facing Liverpool in their quadruple quest: do they have enough time to play, win and recover before their next challenge?

By the end of extra-time, Liverpool's players could barely run. They were so exhausted by the demands of facing the outgoing European champions that the penalties actually offered some form of physical relief. Luis Diaz, who had six efforts on goal during a sensational performance on the left, was replaced by Roberto Firmino seven minutes into extra-time because he'd run his energy tank dry, while left-back Andy Robertson was replaced by Tsimikas in the 110th minute.

When Liverpool face Real in Paris, Diaz and Robertson will be two of the first names on Klopp's team-sheet, so their withdrawal at Wembley was significant in that it pointed to their manager being cautious not to push them too far and risk them being injured. That fate has already befallen Fabinho, who missed this game because of a hamstring strain suffered in the 2-1 win at Aston Villa in midweek, but Klopp is confident that the Brazil midfielder will be fit to face Real.

However, there will be concerns over Salah and Van Dijk. Both are crucial to Liverpool's team -- arguably their most important players, alongside goalkeeper Alisson Becker -- so to be without them in Paris would be a hammer blow. Yet they may also be needed at Southampton and, if Liverpool win that game, at home to Wolves on the final of the season next Sunday.

Klopp is a sensible manager and he won't risk his best players unless the stakes are so high that he simply has to, but Liverpool are now at the stage where every game is huge. They are all must-win fixtures, but players can only push their physical and psychological limits so far and the situation with Fabinho, Salah and Van Dijk is a testament to do that.

"I think Virgil is fine, but his muscle was hurt," Klopp said, in an attempt to play down concerns over his centre-half.

Even if they are all able to run out at Southampton on Tuesday, their muscles and minds are starting to feel the heat, so everything is now a risk for Klopp. Liverpool are clinging onto the quadruple by their fingertips, but they still have some grip and that is remarkable considering their workload.

They are now potentially two weeks from history. Two down, two to go, but the next two are the hardest to win, especially with injuries beginning to pile up.