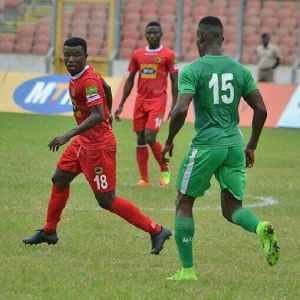 Zone One Champions Techiman Eleven Wonders have started preparations for their maiden Premier League campaign, strengthening their squad for the top flight.

The reports further say that both clubs have already agreed on an undisclosed amount as the transfer fee of the player and a concord between the player and the club on his personal terms will seal the deal.

Sources close to the young player have disclosed that Aduana Stars wanted the player to return to Dormaa where he had a short stint with the Ghana Premier League champions Aduana Stars but Obeng has snubbed his former club to join the new comers for the coming season.

Obeng Kwadwo managed 14 goals for his side last season, 3 in the FA Cup and 11 in the DOL campaign.