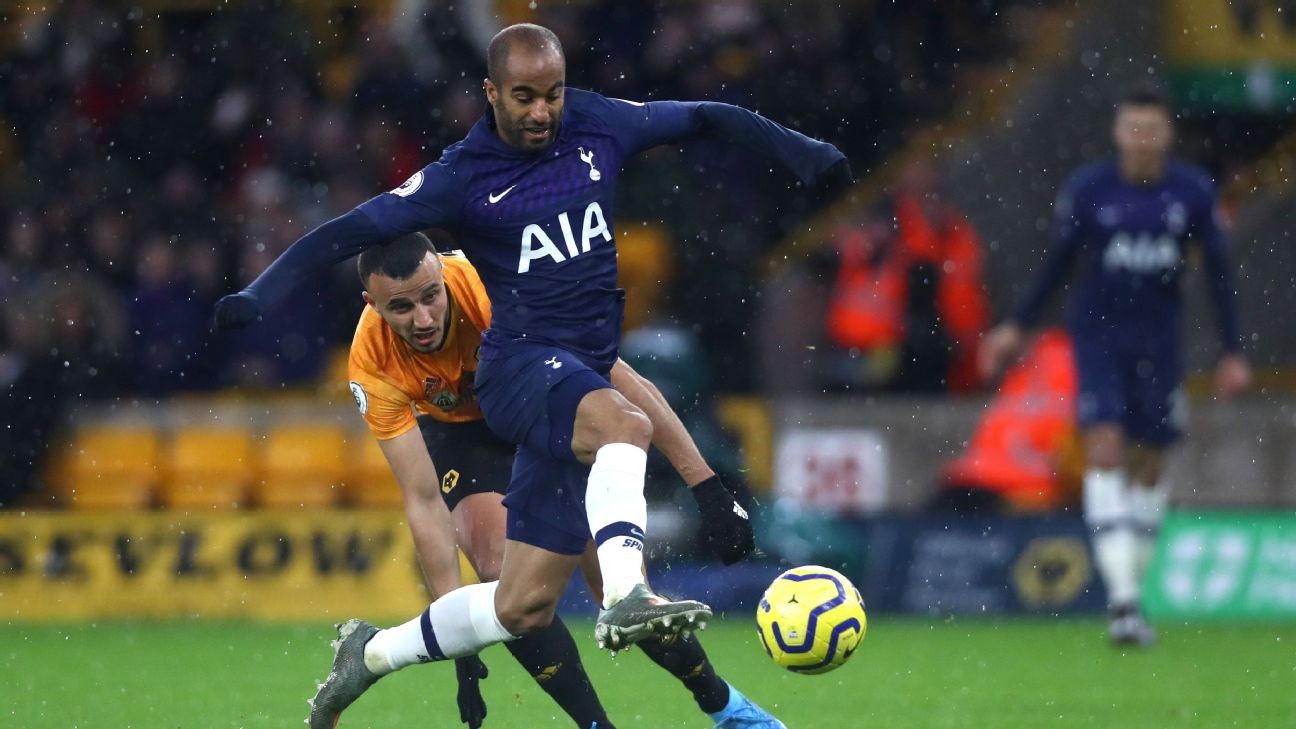 Tottenham Hotspur moved up to fifth in the Premier League table as Jose Mourinho's side scraped a 2-1 victory over Wolves in a thrilling encounter at Molineux.

The visitor's started brightly and with lead with just eight minutes on the clock courtesy of a Lucas Moura screamer, but the tireless hosts fought back and Adama Traore's thumping second-half strike looked to have earned Nuno's side a deserved point.

But Spurs refused to give up, and Jan Vertonghen's last-gasp header secured all three points, before Ruben Neves fired wide in the dying seconds.

Spurs made the better start to the game and were good value for their early lead, with Moura's fine solo effort certain to be among the Goal of the Month contenders, while Verthongen's excellent late header means Mourinho's side leapfrog their opponents in the Premier League table.

Try as they might, Spurs struggled to match the unbelievable energy levels of their opponents and Mourinho's side just couldn't fight their way into game for large spells. Davinson Sanchez found himself trapped in a nightmare against the troublesome Diogo Jota and Raul Jimenez, whilst Vertonghen had to answer to the pace of Traore.

6 -- The Spurs boss seems to have reignited some individual fires, with Eric Dier the latest man to produce an inspired display on his return to the starting eleven. Mourinho's men showed a willingness to throw bodies in front of the ball time after time in the face of a Wolves onslaught, and the manager will be pleased with his side's resilience.

GK Paulo Gazzaniga, 7 -- Answered all the questions he was asked with a couple of routine first-half stops. He was much busier after the break, reacting superbly to claw on to Traore's low cross before beating away Jimenez's strike which looked destined for the bottom corner. Kept Wolves at bay with an outrageous fingertip save to deny Romain Saiss' late header.

DF Serge Aurier, 6 -- The Ivorian started brightly, producing a series of vital interventions -- including a well-timed header to nod away Joao Moutinho's dangerous free-kick -- to snuffout danger, albeit at the expense of a corner. Found his attacking freedom limited in the second half as he was forced to provide cover for the struggling Sanchez.

DF Davinson Sanchez, 4 -- There could be no questioning the defender's workrate and he produced some important blocks, but his positioning was poor at times and he was was given a torrid afternoon by Jota and Jimenez. He was guilty of getting too tight to Jota in particular, which made it far too easy for the Portugal man to spin away from his marker before beating him several more times on his way into the box.

DF Toby Alderweireld, 6 -- The centre-back was an instrumental cog at the heart of a robust-looking Spurs defence, but he survived a scare following a mix up with his goalkeeper as Spurs looked to play out from the back against a high Wolves press. However, like his fellow defenders, he showed a willingness to throw his body in front of everything.

DF Jan Vertonghen, 6 -- The Belgium man has proved to be an inspired choice at left back in recent weeks, but he struggled against the lightning pace of the twisting and turning Adama Traore and gave the latter too much room to thump the ball into the top-left corner. Redeemed himself with a stoppage-time winner from Eriksen's corner.

MF Moussa Sissoko, 7 -- Tried to play with more intensity in an improved display. Almost unleashed Son with a wonderful cross-field ball after bursting forward, but the South Korean couldn't quite bring the ball under his spell. He was quieter after the break, but produced a perfectly-timed challenge to thwart a Wolves attack down the left.

MF Eric Dier, 7 -- A much-improved performance from the defensive midfielder in his preferred position. He provided his defenders with vital cover in a tireless display and was desperately unlucky not to grab himself a goal following a sublime one-two with Alli, but his dragged effort clipped the outside of the post.

MF Lucas Moura, 8 -- Fired Spurs in front with an absolute wonder-goal, bringing the ball under his spell before dancing into the box and firing an unstoppable strike into the roof of the net past a helpless Rui Patrico. Another good display from the forward, who is refinding his best form under Mourinho.

MF Dele Alli, 7 -- Involved in some of Spurs best moments. The midfielder produced flashes of glorious link-up play with his teammates, first racing onto Harry Kane's cushioned knock-down only to be thwarted by Patrico, before teeing up Eric Dier with a remarkable lobbed return pass. Almost double his side's lead, but curled is effort narrowly wide of goal.

MF Son Heung-min, 6 -- The South Korean struggled for time on the ball, but nearly crafted the opener straight from the kick off with an excellent threaded pass to find Moura, only for his teammate to eventually be crowded out. He later looked to conjure up another sensational finish, but his ballooned free-kick wasn't a million miles away from clearing the entire stadium.

FW, Harry Kane, 6 -- No goals on this occasion, but the England centre-forward showed flashes of brilliance with spells of hold-up play to match any number 9 and unleashed Alli with a lovely cushioned header into the midfielder's path. Ultimately though, he lacked support a Spurs struggled to secure a strong foothold in the game.

DF Juan Foyth, NR -- Replaced Son in stoppage time, but had no time to make an impact.

MF Christian Eriksen, NR -- Replaced Lucas Moura in the 89th minute and proved the architect of a dramatic late winner with a dangerous corner that was headed home by Vertonghen