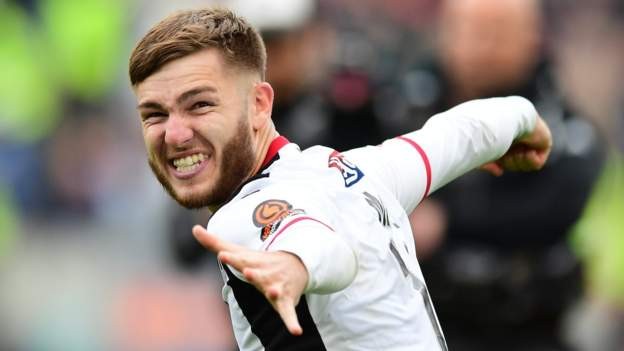 Luton Town have signed Grimsby forward John McAtee for an undisclosed fee and loaned him back to the League Two club for the rest of the season.

The 23-year-old scored 14 goals in 37 National League games last season - including one in the play-off final as the Mariners won promotion.

He began his career at Shrewsbury and also had two years with Scunthorpe.

"I want to get more game time so when I'm back here next year, I'm ready to go," he told the Luton website.

"I'm sure everyone in football has seen Luton Town's rise for themselves. They've made that climb quite remarkably when you look at how they've done it.

"I've definitely taken notice of it and seen the progression, and hopefully this year, for me personally and for Grimsby, I can try and help them get another promotion too."

Details of McAtee's contract with Luton have not been disclosed.

Grimsby chairman Jason Stockwood said having McAtee back on loan this season was a "big incentive" in them agreeing to the move.

"We obviously really wanted to keep John at Grimsby Town and we offered him a new deal in the close season to get him on a longer contract," said Mariners chairman Jason Stockwood.

"We knew there was a good chance we'd probably end up losing John on a free at the end of the season, and so at least by letting him go now, the club has been able to benefit from his transfer."