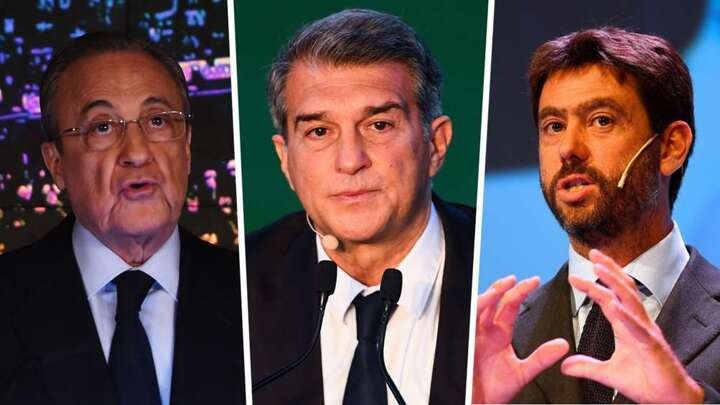 Real Madrid, Barcelona and Juventus have been emboldened to keep their Super League dreams alive by a European court ruling against UEFA on Friday.

The court has determined UEFA cannot sanction clubs for signing up for the Super League, which the continental powers have taken as a signal that "going forward we will no longer be subject to ongoing UEFA's threats".

The organisations have said their "aim is to keep developing the Super League project in a constructive and cooperative manner" while accusing UEFA of monopolistic practices.

Following a similar ruling in a Spanish court last month, a European court has ordered UEFA to revoke all legal sanctions imposed on Real Madrid, Barcelona and Juventus for planning the creation of the breakaway Super League.

A statement released by three of the founding members of the Super League said: "FC Barcelona, Juventus, and Real Madrid CF welcome today's Court's decision enforcing, with immediate effect, UEFA's obligation to unwind the actions taken against all European Super League founding clubs, including terminating the disciplinary proceedings against the undersigning three clubs and removing the penalties and restrictions imposed on the remaining nine founding clubs for them to avoid UEFA's disciplinary action.

"The Court backs the request made by the promoters of the European Super League, dismisses UEFA's appeal, and confirms its warning to UEFA that failure to comply with its ruling shall result in fines and potential criminal liability. The case will be assessed by the European Court of Justice in Luxembourg, which shall review UEFA's monopolistic position over European football."

The clubs then outlined their plans for the future, claiming they would keep developing the Super League project in a new form.

"We have the duty to address the very serious issues facing football: UEFA has established itself as the sole regulator, exclusive operator, and unique owner of rights of European football competitions. This monopolistic position, in conflict of interest, is damaging football and its competitive balance. As shown by ample evidence, financial controls are inadequate, and they have been improperly enforced. Clubs participating in European competitions have the right to govern their own competitions.

"We are pleased that going forward we will no longer be subject to ongoing UEFA's threats. Our aim is to keep developing the Super League project in a constructive and cooperative manner, always counting on all football stakeholders: fans, players, coaches, clubs, leagues, and national and international associations. We are aware that there are elements of our proposal that should be reviewed and, of course, can be improved through dialogue and consensus. We remain confident in the success of a project that will be always compliant with European Union laws."

Headed by Real Madrid president Florentino Perez, the Super League started as a dramatic plan for many of Europe's top clubs to break away from their existing competitions to create their own insular league immune to relegation.

After mere days, however, most of the organisations had backed out amid fan backlash.